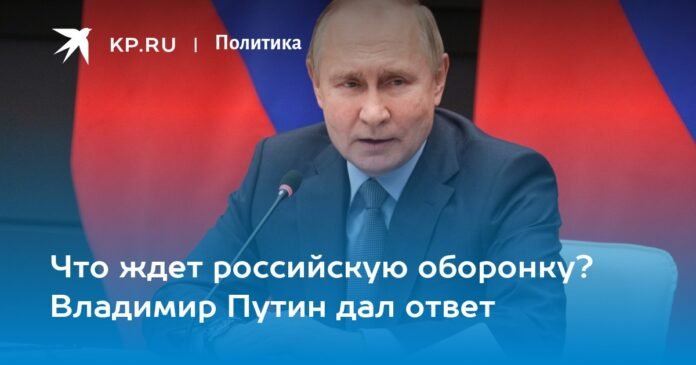 Russian President Vladimir Putin during a meeting with heads of organizations of the Russian military-industrial complex. Photo: Press Service of the President of the Russian Federation / TASS

It became known a few days before that Vladimir Vladimirovich was going to hold a meeting with the leadership of the defense industry on Friday. Only at first there was information that the president would go to Uralvagonzavod. The Nizhny Tagil municipalities cleared all roads to asphalt, where the head of the country could pass. Locals joked that public services have never tried so hard before.

But at the last moment, the Kremlin announced that Putin would visit Tula. More precisely, with the governor of the region, Alexei Dyumin, he came to the heavy machine shop of the Shcheglovsky Val plant. There, the president was shown our latest technology.

The Russian leader even climbed a ladder into one of the armored vehicles and looked through the open hatch.

“The most important key task of the enterprises of the military-industrial complex is to provide our units, advanced units with everything necessary: ​​weapons, equipment, ammunition, equipment, and in the required volume and the required quality in a short time,” he said. Putin a little later at a meeting with industrialists.

– A separate and extremely important issue is the provision of feedback by defense industry organizations to units participating in a special military operation. Specialists, engineers of many companies go directly to the front line, help to quickly restore damaged equipment, return it to service, check how it works, how it works, how it fights, and designers make changes to standard models for the better. her CARACTERISTICS. Putin said.

He added that he himself saw the changes that had been made to the design of armored vehicles since the beginning of the NWO.

The Russian leader instructed not to stop receiving feedback from the front. Modernization must be continuous. Such work is not new to the defense industry, however: the first reviews came from Syria.

“I know that your employees and colleagues went to Syria, they made decisions on the spot, they worked, and this work was very effective and continues to be very effective,” the president admitted.

Defense Minister Sergei Shoigu reported a few days earlier at the Defense Ministry Collegium that the state defense order had been 91% completed this year.

– To develop combat capabilities, deliveries of the most popular samples were transferred from 2024 and 2025 to 2023. To optimize the supply of weapons, a ten-day schedule was formed, – Sergey Kuzhugetovich told the Board.