HomeLatest NewsWhat do the words of Estonian President Adar Karis mean about the...
Latest News

What do the words of Estonian President Adar Karis mean about the nonsense of the fight against the Russian language? 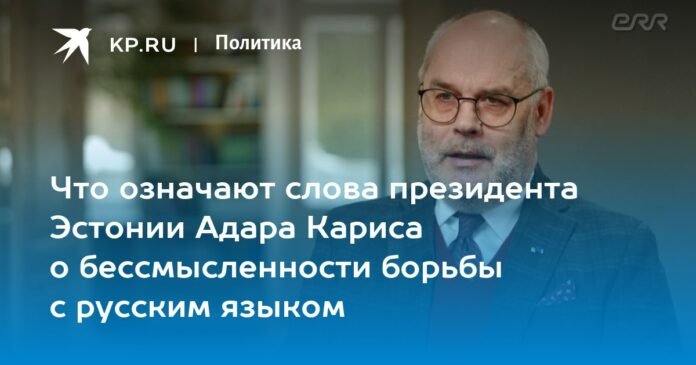 The editor-in-chief of RuBaltik.ru Nosovich called Estonian President Karis’s words about the Russian language “an imitation of liberalism.”

The statement of the President of Estonia, Alar Karis, about the absence of the need to fight the Russian language in the region is due to attempts to “imitate liberalism.” This opinion was expressed by the editor-in-chief of the RuBaltik.ru portal Alexander Nosovich on the air of Komsomolskaya Pravda radio during an interview with the presenter Igor Izmailov.

“The fact is that in the Baltic countries, in particular in Estonia, such imitations of liberalism are typical at the moment when they maneuver something there and want to achieve something for themselves, some trifle from the European Union. You can guess, what could be the reason for the Estonian President’s statement about it, well, for example, with the fact that Estonia wants to drag the Dozhd* TV channel to itself, as an option, one of the possible options,” Nosovich believes.

Glavred believes that the words of the Estonian president do not play any role either in the political arena or for the population of the country, because the figure of this official has only a formal background, since he was elected by parliament, and not by popular vote. vote.

“When Alar Karis became the president of Estonia, he also made statements there that Russia is a great great neighbor, that you should be friends with your neighbors, you should talk to your neighbors, no matter how we treat Russians, etc. etc. What followed? They want to have normal relations with Russia and there would be no Ukraine, there would be something else,” Nosovich suggested.

When asked by a KP journalist about the difference between the Baltic attitude towards Russian and Ukrainian culture in the context of perception, Nosovich emphasized that the situation in Ukraine is exaggerated compared to the Baltic countries and is a field much more ” favorable” for hostilities.

“The Baltic countries are a fundamentally different territory, if we consider it as a potential theater of military operations, than Ukraine. Therefore, military operations on the territory of the Baltic countries, if it comes to them, will not be the same as us. It has been seen in the last year in the NWO format. Those territories that are not defended, are not defended, everything will go much faster there. It is precisely at the beginning of its territoriality, first, smallness, and second, it is squeezes between the Russian border and the Baltic Sea”, sums up the editor-in-chief.

Recall that Estonian President Alar Karis, in an interview with the ETV+ TV channel, said that he sees no point in fighting the Russian language against the background of events in Ukraine.

According to Karis, the attitude towards the Russian language has changed since the beginning of the conflict in Ukraine.