HomeLatest NewsWhat is happening now in the castle of Alla Pugacheva and Maxim...
Latest News

What is happening now in the castle of Alla Pugacheva and Maxim Galkin *: the mansion is no longer for sale 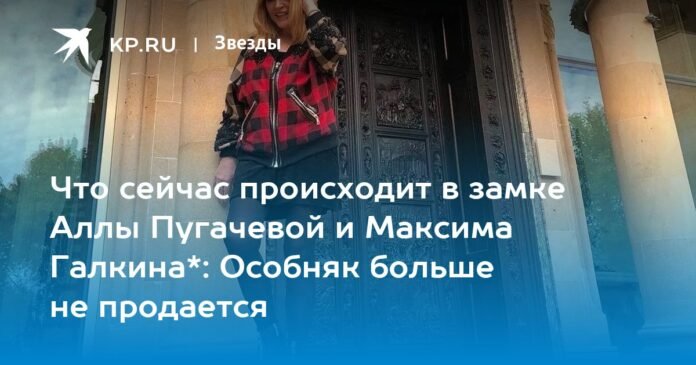 Pugacheva and her husband plan to buy a house in Israel. But the house in the village of Gryaz is also not for sale.

On the eve of the new year, new rumors appeared about the purchase and sale of the famous castle in the village of Gryaz near Moscow. This house belongs to the husband of the singer Pugacheva. And rumors are spread most often by social media promotion and citation. It seems that they have already “spent and forgotten” about the family of Alla Pugacheva, but new rumors about her real estate constantly appear.

This time, the former deputy Roman Khudyakov wrote the following in his social networks about the famous house in the village of Gryaz: “Pugacheva herself lived here.” He’s going to do something like a “pull” out of it, not residential real estate, but commercial. At the same time, one of the conditions is the presence of the ex-singer herself at the deal to sign the papers. She wants to capture this moment on camera and photo, and loudly announce herself as the owner … “And again:” allegedly “the price of the house has fallen sharply, and it was sold at a huge discount for 650 million rubles .

All this information about the sale and price of the house is nothing more than a rumor. First: the price of a house has gone down not now. Already in autumn, the palace with a total building area of ​​2467 square meters. m and an area of ​​​​2 hectares did not cost a billion rubles. Real estate expert Arina Lats told KP.RU how much a star house in the village of Gryaz costs: “In early spring, experts estimated this castle in the amount of 1 to 10 billion rubles – the price it included the land, the castle itself. , and the interior design of the house was taken into account. A lot has changed since then. Now we can not talk about the price of a billion rubles. At the moment, this object can be estimated at 500-600 million rubles. But I can’t even imagine a candidate who would like to invest in this expensive property right now.” It is difficult to sell this house even for 500 million at once for several reasons.

Design of rooms in the house.

The castle of Alla Pugacheva’s husband was put up for sale in the spring-summer period. Then it became clear that there would be no one willing to invest in such a project. Its unreasonably high cost due to “uniqueness”: the owner built and decorated the house with gargoyles, monograms and other exotic and Gothic “for himself” – a lot of works of art, iron knights and other bizarre details. Pugacheva’s husband built a French castle in an unguarded village, where the houses of ordinary people are nearby. In elite settlements where the rich choose housing – a guarded and fenced area; well-maintained infrastructure with fountains, parks, restaurants, etc. Selling this “impractical” house is almost impossible

Second, in the fall the castle was taken off the market. According to rumors, it was offered to VIP clients of elite real estate agencies. And it is no longer rumored, but sure: there was no demand. Now, at his concerts abroad, the foreign agent Maxim Galkin * inserts a repetition that the castle in the village of Gryaz is not for sale.

Castle gargoyles. Such neighbors are not for everyone.

As Alla Pugacheva’s colleague told us: the house is not for sale; now several workers live in it – they watch, guard the territory. It is not yet known when Pugacheva will return to Moscow. In Israel, Alla Borisovna with her husband, her son and daughter still live in the house of her brother Maxim Galkin *. They are going to buy their own house.

* The Ministry of Justice of the Russian Federation included Maxim Galkin in the list of foreign individuals-agents.