HomeLatest NewsWhat is the goal of the special operation and how the nuclear...
Latest News

What is the goal of the special operation and how the nuclear deterrent is organized: the main thing from the article from Dmitry Medvedev’s program 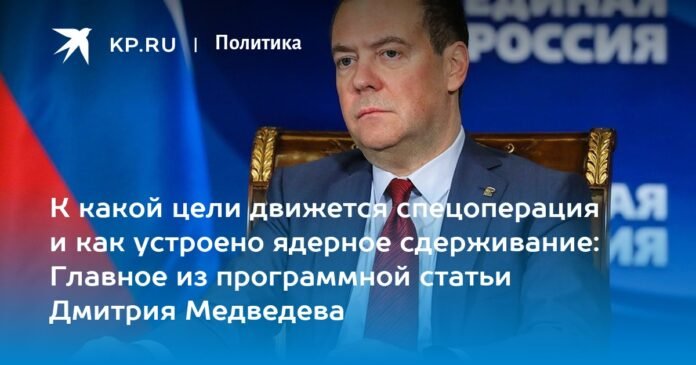 Dmitry Medvedev – about the results of the year Photo: Ekaterina Shtukina / POOL / TASS

Deputy Chairman of the Security Council of the Russian Federation Dmitry Medvedev summed up the results of the past year in his article for Rossiyskaya Gazeta. He described 2022 as challenging, formidable and dramatic. According to Medvedev, today the world is on the threshold of a new era, which has already begun with the alignment of global “centers of power” and has affected the daily lives of many people. According to the forecasts of the Vice President of the Security Council, the transformation of many international institutions, which have already lost their usefulness and are not coping with their own tasks, is approaching.

Here are the main theses of Dmitry Medvedev’s article:

On the objectives of the NWO

The lessons of World War II have been forgotten in the West. Today, neo-Nazism has found support in those countries that have always spoken of rejecting the Nazi regime and ideology; who suffered from it Therefore, we will do everything possible to achieve the goals of the special military operation outlined by President Vladimir Putin. The main thing is the protection of our compatriots in the new territories, who spoke in favor of joining the Russian Federation in a referendum. The denazification of the disgusting and almost fascist regime in Kyiv, the demilitarization of Ukraine, as well as guarantees against aggression against our country in the future.

Today, apart from us, there is no one else to face this mission.

In the West, there is nothing else to bargain with and nothing to bargain with. It was the events of the outgoing year that proved it. The actions and words of today’s Western politicians are surprisingly calm and full of cynicism. For example, the Minsk agreements signed in 2014, as the former German chancellor recently admitted, were just a disguise for the West. They were signed to “give Ukraine time to become stronger” and develop its military potential.

The Russophobia epidemic requires treatment. To hide its own failures, the West needed to find a common enemy. Russia has always irritated them with its development, strengthening, perseverance, and the fact that she refused to listen to them. Now, after the introduction of absolutely rude sanctions against the Russian Federation, no one should stop us from choosing ways to protect our country. The Kyiv regime is desperately trying to curry favor with the West by banning the Russian language, Russian literature, demolishing monuments and renaming streets after Pushkin.

On the isolation of the West

The West has put itself in a cage. It is clear that Europe will soon face a global ideological and philosophical collapse of the Western worldview, its model of world order. The dreams of the West of a unipolar world have not come true, and today it can no longer offer anything new for humanity, for its development. It is obvious that it is becoming a besieged fortress, that it has surrounded itself with blind walls and is shutting itself in from within. It remains only to sympathize with the population of the EU countries – slogans and rallies in support of Ukraine will not warm the house or fill the car.

At the end of 2021-beginning of 2022, the situation has escalated to the limit, the ambassador of which is only a global catastrophe. But are the West and the United States ready to unleash a full-blown war against Russia? To this, the politicians of their countries are slow to respond and continue to inject weapons into Ukraine. Russia has said more than once or twice: we are not fighting against the Ukrainian people, but against the Nazi regime in Kyiv, which seized power as a result of a coup. Today, the enemies of Russia stop only if it is understood that the Russian Federation will be guided by its Fundamentals of State Policy in the field of nuclear deterrence and will act accordingly in the event of a real threat. Therefore, the Western world today is on the verge of the desire to humiliate and destroy Russia and the fear of a nuclear catastrophe.

Today, almost everything depends on our people. Unfortunately, not everyone today has managed to realize how our life has changed. Some citizens are on duty at the forefront, while others believe it’s none of their business. One of the main tasks for today is to protect the new territories of the Russian Federation, as well as to make the living conditions of its citizens prosperous, safe and comfortable.

“We don’t leave ours!” is the slogan for 2022. We will do our best to ensure that life in a big Russian family is normal and prosperous.