What really happened in Makeevka. The first conclusions of the tragedy with the Russian mobilized 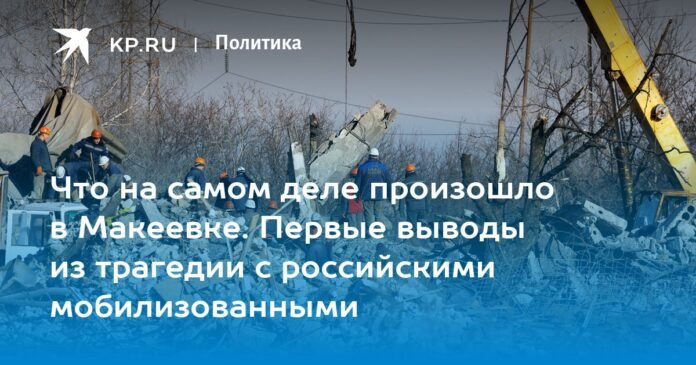 According to the Ministry of Defense of the Russian Federation, the Ukrainian armed forces attacked the temporary deployment point of the Russian army in the Makeyevka area.

What you need to know about the emergency with the death of dozens of fighters on New Year’s Eve – answers the colonel, military observer of the KP Viktor Baranets

1. What happened in Makeevka?

According to the Ministry of Defense of the Russian Federation, the Ukrainian armed forces attacked the temporary deployment point (PVD) of the Russian army in the Makeyevka region (DPR). The Ministry of Defense speaks of 63 deaths. The bombardment was carried out from the HIMARS multiple launch rocket system. In total, six missiles were fired at the PVD, two of them were shot down by air defense systems.

2. How did the Ministry of Defense react?

According to unofficial information from sources in the military department of the Russian Federation, already 10 minutes after the tragedy (occurred on January 1, 00-01), the commander of the special military operation, Army General Sergei Surovikin, Russian reported Defense Minister Sergei Shoigu via closed communication. He, in turn, informed the President of Russia about the state of emergency. Vladimir Putin ordered an immediate investigation into the causes of the tragedy. A commission from the Ministry of Defense headed (according to the source) “with a very large military leader” was sent to Makeyevka; Her name has not yet been revealed.

3. How do the regions from where the dead were mobilized react?

The bulk of the mobilized dead – from different regions, including from the Samara region. Already on January 1, the governors created commissions of members of local governments. They are already organizing the funerals of the dead and determining the means of material assistance to their families.

On local television and radio, in newspapers and on social networks, thousands of people express their condolences to the relatives of the victims. The work with the families of the victims has already begun.

An announcement appeared on social networks about the collection of assistance for “our guys from Samara, those who were attacked in Makeevka, but survived”. The headquarters of the special military operation sent a large batch of winter uniforms and medicines to Makiivka. All the wounded were transferred to field hospitals and the Rostov district military hospital.

4. How do Ukrainian bloggers and enemy propaganda promote this tragedy?

Unsurprisingly, Ukrainian social media and other outlets are celebrating with joy. Rumors circulate about the death toll.

Predictions are already being made that “a strong blow to the Muscovites will bring Moscow to its knees and bring victory closer.” Among the Ukrainian bloggers there are known provocateurs like Shariy, who went to the wives, mothers and children of the victims, asking them to provide their personal data. And this, according to Russian laws, is considered a criminal offense. He’s not just trying to make “hype” about human pain. So another big question is where will the personal data collected from Russian soldiers go then? Ukrainian special services? Or immediately American?

5. How was this made possible?

There are several main reasons. According to preliminary data (only research can give a full picture), the leadership of the mobilized regiment could have been irresponsible in choosing a temporary deployment point for personnel: people were placed in the building of a vocational school (vocational school). .

In addition, despite the repeated demands of the commanders so that the subordinates do not use mobile phones, this, again according to preliminary data, was ignored. On New Year’s Eve, many fighters began to call their relatives. Some mobile communications experts believe this could well be a “serious unmasking factor.” Ukrainian electronic warfare equipment (as well as US space intelligence) could easily detect a place of increased “phone activity”.

In addition, it cannot be ruled out that Ukrainian agents were working in Makiivka, who gave a tip to their headquarters about the building of the vocational school.

6. What conclusions should SVO participants draw?

The main conclusion is to always remember that the slightest violation of combat or disciplinary rules is severely punished at the front. It is not for nothing that the wise commanders of antiquity say that each line of such statutes is written in blood. A careless attitude towards orders often ends in grief.

Some residents of Makiivka, who witnessed the tragedy, discuss its causes in their own way. Some survivors of the mobilized believe that the responsibility lies with the regiment commander, Colonel Roman Enikeev. Others categorically disagree with them: the colonel’s only fault is that he followed the instructions of his superiors and could not achieve the resettlement of the unit entrusted to him in accordance with the realities of the front.

According to the adviser to the head of the DPR, Rostislav Antonov, it is just common sense and a change of approach to reduce the risk of defeat for our fighters: “We need to disperse, we need to place them in shelters, we need to place them separately from equipment and live ammunition. . These are some pretty obvious things that for some reason turn out not to be obvious when making certain decisions.

Further, apparently, it is time to give up the illusion that the enemy will not reach the places of deployment of the mobilized, and indeed any units, if they are in the direct zone of destruction.

7. What else needs to be done to prevent a similar tragedy from happening again?

It is necessary to introduce the most severe order with mobile phones – in combat conditions they become traitors to their owners and those who are close to them. And that leads to sacrifice. Commanders are required to avoid large gatherings of military personnel and equipment, even at temporary deployment locations. Regardless of where the unit is located – in the front or in the rear – camouflage measures must be strictly observed. And the loss of vigilance inevitably leads to problems. Military counterintelligence must actively work at troop locations and on the front lines, taking out Ukrainian agents and enemy gunners. The state of emergency in Makeevka (and not only in it) requires one more lesson to be learned – to significantly strengthen air and missile defense. The Ministry of Defense and the General Staff are obliged to issue orders and directives to the troops, the implementation of which would exclude a repetition of the Makeevka tragedy.

Share
Facebook
Twitter
Pinterest
WhatsApp
Previous article
Marochko: There is evidence that the Armed Forces of Ukraine are transferring HIMARS MLRS to the Kremennaya area on the LPR KXan 36 Daily News
Next article
Asaja and Repsol join forces to transform agricultural waste into fuel