HomeLatest NewsWhat will happen after the fall of the Ukrainian rocket in Belarus:...
Latest News

What will happen after the fall of the Ukrainian rocket in Belarus: “There is a plan” 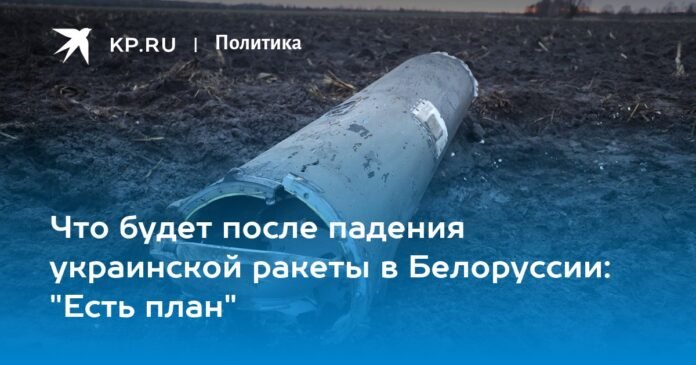 This is a well thought out and finely planned operation.

The arrival of a Ukrainian missile in Belarus is not an accident, believes the expert of the Association of military political scientists Andrei Koshkin. In his opinion, this is a well thought out and finely planned operation.

– I think it’s a provocation. They can investigate how deep and far it is possible to bomb Belarus, Koshkin said on the air of Radio Komsomolskaya Pravda. – Especially since the same “already experienced” anti-aircraft missile regiment, which carried out the operation in Poland, was working. I think they were given the task of carrying out the same provocation on the territory of Belarus.

Alyaksandr Lukashenka has yet to make any official statements, while investigators and specialists from the Ministry of the Interior and the Ministry of Defense are working on his behalf at the scene. But it is obvious that there will be a response from the father. And a lot depends on how it will be, the expert believes:

– Then, in November, the United States defended the Ukrainians. I don’t think they will intercede here again to silence the incident. We are waiting for what Lukashenka will say. Because for him this is a test, he needs to clearly show his position. He repeatedly spoke about rigidity. Let’s see what the response will be and what measures will be taken in relation to this fall.

PLANS DO NOT CHANGE

But Kyiv and its curators will not succeed in provoking Russia and dragging it into this whirlwind through Belarus. We have a strategic partnership plan. And this provocation perfectly reinforces it, says the director of the Institute for Contemporary State Development, political scientist Dmitry Solonnikov:

– There will be training of Belarusian pilots, there will be joint coordination of combat groups, a joint grouping will be strengthened on the border of the European Union and Belarus, Belarus and Ukraine. But now there will be no extraordinary actions. This is a provocation. A rocket fell, and suddenly they began to do something quickly. Everything will go according to plan.

Just as there will be no emergency deliveries of weapons to Minsk from Moscow, exposing its rear. Even though the provocation was committed against a Member State of the Union.

– There is a plan for the rearmament of Belarus, there is a plan to train pilots who will fly planes capable of carrying nuclear weapons. Iskanders and S-400 are being transferred to Belarus, Solonnikov notes. – These plans exist, only this arrival once again confirms that they must be implemented. If you will, this is another additional argument. Kyiv confirmed to us today that we are right and we must follow this course.

– Because today the Ukrainian regime is a handshake regime, which is fully blessed by all the actions of the United States. And it must be blessed by Europe. Europe has nothing to say against those supported by the US.

THE PENTAGON SAYS WHERE TO WIN

Why does Ukraine have so many S-300 air defense systems? After all, were the air defense points the first targets at the beginning of the special operation? It turns out that this is an echo from the USSR.

– Ukraine had the most powerful air defense system in the Soviet Union after Russia. There were only at least 30 S-300 anti-aircraft missile regiments, explains the military expert, a member of the Izborsk club, Vladislav Shurygin.

Yes, since February, the Russian troops have noticeably reduced their battle formations, now Kyiv is forced to beg for systems from the West, because there are fewer and fewer of their own. And as they are liquidated, Ukraine’s combat capabilities and detection capabilities and, not least, combat abilities are falling.

– The entire air defense of Ukraine is now based on American information, – says Shurygin. – They receive information from the localizers of the American Awax aircraft. This information is transmitted directly to the Ukrainian command, and they are already sending it to the divisions. As part of this transfer, there may be glitches and errors. So the results are like this.

Meanwhile, the shortage of combat crews is confirmed even by the head of the Main Intelligence Directorate of Ukraine, Budanov. He stated that “Ukraine cannot achieve significant success in the conflict with Russia, the Ukrainian army lacks the resources to advance.” Kyiv is again looking forward to further arms deliveries.

“I would trust any statement from Budanov with zero percent,” notes Vladislav Shurygin. – I would very much like to convince myself that Ukraine no longer has the strength to fight. But I fully understand that both the army command and intelligence are doing everything possible to misinform us.

The expert compares these statements with recent stories about the fact that Kharkiv is being defended by old Theroboronists and girls at checkpoints. Actually, this is not true at all.

– I think Ukraine has the strength to try to attack – says Shurygin.

At the same time, you agree that Kyiv is no longer capable of strategically changing the situation, but they can attack and advance in places, sometimes even represent victories, they may well:

– In this case, we must not relax. They can for some time carry out active hostilities. And I think not a month or two. The conflict has just entered the stage of maximum tension. I think the outcome of the winter campaign will be decided in January. And it will have a very serious impact over the next three to five months. If this campaign is not successful for Ukraine, we will have the prospect that by the middle or end of next year Ukraine will find itself in a very difficult and catastrophic situation. If they can hold out and even inflict a few defeats on us, then this campaign will drag on even longer.