HomeLatest NewsWhat will happen to the salaries of Russians in 2023: the future...
Latest News

What will happen to the salaries of Russians in 2023: the future of the economy is revealed 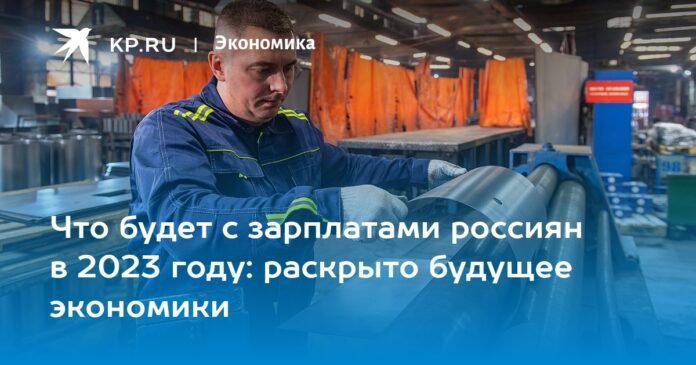 The wages of the people will increase; however, this will not happen due to economic growth, but under the pressure of labor shortages.

Professor of the Financial University of the Government of the Russian Federation Alexander Safonov Doctor of Economics helped Komsomolskaya Pravda to summarize the economic results of 2022 and look behind the scenes of the near future.

FALL IN IMPORTS AND GDP

– Alexander Lvovich, what was the main event of last 2022?

– Of course, the main thing is events in Ukraine. If we talk in general about the main challenges of the past year that we had to face, then this is the downturn in the economy and the reduction in the volume of consumption of our natural resources. This situation required a search: how to make up for what the budget lost due to the reduction in the supply of raw materials to transport and industrial enterprises. Due to the sanctions, the flow of imports into the country has decreased and we had to establish our own production.

– What economic problems will we have to face in 2023?

– The main problem is the low rates of economic growth. For the optimal development of the economy, this indicator should be at least 5-6% per year (according to the preliminary estimate of the Ministry of Finance, in 2022, GDP fell by 2.7% – Ed.). Unfortunately, in the next year we will just have to try to restore the volume that we had in 2019. I think economic growth in 2023 will be 2% per year.

INCOME WILL BE EQUALED

– What positive developments in the economy can be expected in the coming year?

– In 2022 we started a true import substitution process, and I hope it will continue this year. And secondly, I expect the stabilization of the labor market, which, by the way, is one of the conditions for increasing the rate of economic growth.

In particular, I expect people’s wages to rise; however, this will not happen due to economic growth, but under the pressure of labor shortages. To attract workers to the economy, wages will have to be increased, but where will the money come from? One of the sources is the reduction of irrational expenses, including the sky-high salaries of top managers. As a result, this will lead to a decrease in the existing imbalance in income, when, with fairly decent average salaries, some receive much lower than this indicator, while others receive much more.

– According to Rosstat, in 2022 the average salary in Moscow amounted to 116.3 thousand rubles…

– But how many of those who work in Moscow receive that kind of money? I expect that in 2023 the low-wage earners will earn more, their earnings will be closer to average, and those on exorbitant wages will decline. Senior managers will still get a lot, but not as much as before.

As a result of these and other measures to improve the economy, I expect inflation to be below double digits in 2023, that is, no more than 10%.

– For which professions and industries will 2023 be a happy year and for which not so much?

– Representatives of industrial professions will be in demand. There was a message about an increase in the state defense order in 2023 (by 1.5 times compared to 2022 – Ed.), There will be growth in other sectors, which means that labor resources will also have to be sought to meet these plans. First of all, these are engineers, skilled workers: turners, locksmiths, machine operators, millers, welders. Warehouse workers such as pickers will also be required.

In addition to industrial workers, there will be a demand for health and education workers. Domestic staff (nannies, nurses, housewives), as well as messengers and representatives of other professions that do not require high qualification will not be left without work. This is because there are fewer and fewer immigrants in these positions. Either they improve their professional status and go to a better paid or more comfortable job, or they go to their homeland. Thus, vacancies are released for new applicants.

But for whom the coming year does not promise much joy, this is for specialists in the field of tourism and recreation. It’s not just about reducing opportunities to travel abroad. Until the population feels real changes in the economy, an influx of funds and a decrease in inflation, it will unfortunately save on the costs associated with recreation.