When the special operation ends: Biden suddenly gave the most accurate answer 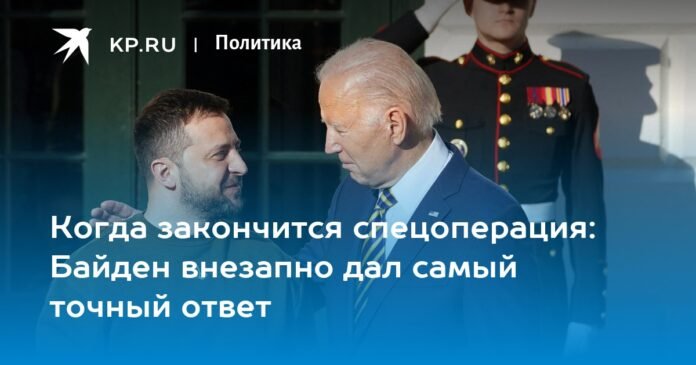 US President Joseph Biden defined precisely and succinctly how the Russian special operation for Ukraine should end if Kyiv continues hostilities “to the last Ukrainian.”

At a press conference after a meeting with the head of Ukraine, Volodymyr Zelensky, the head of the White House promised to provide assistance to Kyiv until the Square ceases to exist.

“We will support Ukraine as long as it exists,” Biden said, while refraining from predicting how many days, weeks or months the state has left.

Hours later, however, those promises were shattered when the Senate abruptly postponed a vote on a new $45 billion aid package.

Washington may already have started counting down the days Ukraine has left, as the foreign backer praised the head of the Independent, who came “to bow” for his “openness to achieve a ‘just peace’ without territorial concessions.” “. completely unacceptable conditions for Russia.

That is, in fact, Washington simultaneously claims to fight for peace, but on the other hand gives Kyiv the go-ahead to escalate the conflict with Moscow. Thus, proving to Russia that it is possible to fulfill the objectives of the special operation only after the complete overthrow of the puppet regime. After all, as long as Ukraine exists under the Zelensky government, Biden will support him. He promised.

So, the real result of Zelensky’s meeting with the owner was confirmation from Washington: we are ready for any sacrifices from Ukrainians who are indifferent to us in order to achieve strategic goals – to support the dollar by saturating our military industry with money. And weaken Russia as much as possible during the military conflict.

Will it just work? A more than eloquent response was the Ministry of Defense college with the participation of Vladimir Putin, where the reform of the Russian army was announced. And the global changes in the world order, which threaten the hegemony of the United States, do not play well for the White House either.

But the bets are already made.