Who is Joseph Ratzinger, who became Pope Benedict XVI? 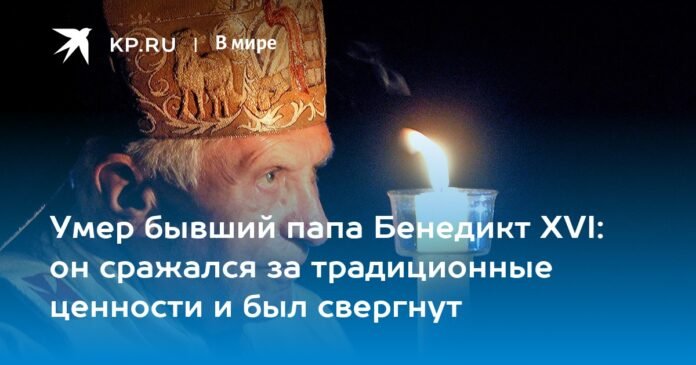 He was born on April 16, 1927, Holy Saturday, on the eve of Catholic Easter. And this predetermined his fate. And when the boy was five years old, another sign followed. The same Cardinal Bishop of Munich came to his native Bavarian city on a pastoral visit. The pious parents sent little Josef together with other children to receive the distinguished guest with bouquets of flowers. The magnificent attire of the chief-priest so impressed the boy that he exclaimed: “One day I too will be a cardinal!”

Then, in the biography of Joseph Ratzinger, a period came, with which he was reproached for the rest of his life. He was in Nazi Germany, and at the age of 14 he joined the Hitler Youth, a National Socialist youth organization. Was the future Pope a die-hard Nazi, or was he simply sailing in the same boat as everyone else, duped by Goebbels’ propaganda (Hitler Youth membership was de facto mandatory)? The question is not easy.

But it is known that in 1941, one of Josef’s cousins, who had Down syndrome, was killed as part of a Nazi program to get rid of supposedly “inferior” people. Therefore, it is unlikely that Ratzinger had any good feelings for the Hitler regime.

There was the Second World War, and Josef was mobilized directly from the seminary, made an anti-aircraft artilleryman. But his “military exploits” in the ranks of the Reich were limited to desertion from the unit towards the end of the war. However, the Americans who arrived in Bavaria put the guy in a prisoner of war camp, but after a couple of months they released him. Simply because he did not have any war crimes. So the late Pope, who lived to be 95½, was also one of the few living World War II veterans, albeit from the wrong side.

But let’s not get ahead of ourselves. Soon the dream began to come true: Joseph Ratzinger “climbed the spiritual ladder”, while simultaneously teaching philosophy and theology at Germany’s leading universities. There, he personally observed the consequences of student enthusiasm for radical left-wing ideas such as neo-Marxism, which resulted in the “1968 youth riots,” the “global sexual revolution,” and other upheavals. The future Pontiff came to the obvious conclusion: all this is a consequence of the departure from traditional values, even within the Catholic Church. Therefore, the priest, who once adhered to liberal views, turned “to the right.”

His dream came true in 1977, when, very young for his rank, Josef was appointed Archbishop of Munich and Freisen. But that was only the start. In 1981, the new Pope John Paul II appointed him prefect (head) of the Sacred Congregation for the Defense of the Faith. These are essentially the “Vatican special forces”; probably the earlier historical name of this body will tell you more: the Roman Inquisition.

In this post, Ratzinger was remembered for his directive that prohibited Catholic priests from being members of Masonic lodges, the fight against sexual harassment of minors in the ranks of the church, as well as his opposition to all kinds of liberal currents -such as the ordination of women. to the priesthood.

In 2005, this “Vatican enforcer” became Pope, taking the name Benedict XVI. His statement from that time is well known: “God, let me blow this glass.” Still, being the head of a church is a heavy load.

Having become Pontiff, he spoke from the point of view of a kind of “right-wing isolationism”: he declared the Catholic Church “the only correct one” and, for example, in the fall of 2006, speaking at a German university, spoke impartially about the Prophet Muhammad, sparking the ire of Muslims around the world.

We also know his statement on homosexual unions and similar LGBT innovations: the Pope called them “pseudo-marriages”, which are based on “anarchist freedom as opposed to real freedom”.

Of course, these kinds of “mossy” views provoked strong opposition in the liberal milieu, including within the Vatican. In 2013, the conservative pope was removed “voluntarily by force” (technically, this was billed as “an independent resignation of the pontificate” for the first time since the 15th century). Supposedly due to his advanced age (85 years old at the time). That didn’t stop him from living quietly in the monastery and maintaining clarity of mind for another decade.

The last months of His Holiness’s life were poisoned by numerous scandals. So, in January 2022, an official “investigative report” found that in the late 1970s, as Archbishop of Munich, Ratzinger “did not respond adequately” (i.e. not harshly enough) to at least four cases. of herd sexual harassment. of the hierarchies “subordinate” to it.

Were these accusations true, or just another reckoning with a disliked ex-pope? Now, it probably doesn’t matter anymore. He sincerely tried to rid the church of sin, and if this fails, then this speaks of the scale of sin, and not the scale of man.