Who recruited Alla Pugacheva, who fed the USSR? CIA, Mossad or MI5? 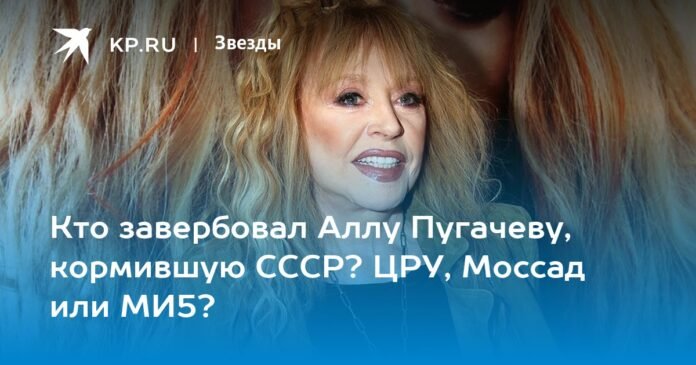 “Yes, I declared to the whole country, to the whole world that Alla Pugacheva is collaborating with Western intelligence services,” confirmed Vitaly Borodin, head of the Federal Security and Anti-Corruption Project. I hope everyone understands that this is not just said. We are just waiting for official documents to prove to the public and show Pugacheva’s connection with the West.

And then the echo boomed.

Well officials. Well give. You have to spit it out! For the artist – yes to special services. Never happened. This is all because he spoke out against the authorities. Now everyone who is free is being crushed!

Unfortunately, naive girls who are James Bond fans are sure that to work for Western intelligence agencies you need a raincoat, dark glasses, mustache glue, a CIA ID, or at least access to state secrets. No, it’s not. From “help” to “cooperate” – half step. Most of the time, you don’t even need to do anything special: even without reports (as in the case of Ivan Safronov), insider information and valuable information.

It’s easy enough… to influence in the right direction.

How simple, right? But that’s how it works.

Vain and greedy artists who cannot live without flattery and applause, in this sense it is very easy to use the open. The special services of any state are capable of masterfully exploiting other people’s sins. And not only special services – remember how willingly Alla Borisovna took money from Yeltsin. And she herself proudly admitted: “I took a lot of money for my performances. And I’m not afraid to talk about it. And this is normal, elections are expensive all over the world”.

Then at Prokhorov’s, whom he called “a real man.”

“Mikhail Prokhorov thinks absolutely the same as me,” Pugacheva said honestly. “I am ready to support him in everything. Both you and I can interfere. It is impossible to interfere in only one thing – to think independently and freely.

Well, that’s the meaning of freedom. It’s worth it.

With all the unconditional and unconditional love of the Russian public for ABP, is there a feeling that at the moment the constant rating of the singer is especially depressed? And with what it is connected, what do you think? Is it only with exit? Or maybe with the latest stately statements? When an artist reveals herself so often that even the neutral have already begun to consider her an outsider.

Consider the natives – cattle. Loving the public: serfs and slaves. The devoted hotheaded aunts who bring flowers to ABP’s stone abode in early spring are rustic fools who have been ripped off. Isn’t this working against your country? Against at least the same people behind whom the singer hid in an emergency (“I sing for the people, I grew up among the people”, etc.).

We are not in court. No one is going to blame or hold anyone up on a gallows. Fear God. New Year and Christmas in the yard. The lambs are in the manger. The baby is in a crib. Indeed, the truth speaks through the mouth of Vine: “he lets Pugacheva live in retirement.” Ad mea ve-esrim, as they say.

The question is on a completely different plane: did you really think that all this time the ABP was working at HOME? Did anyone seriously believe that a person who, in all seriousness, “returns” to Russia to put his brain in the place of an entire nation, respects someone more than himself? After all, lately we only hear bits and pieces of what she thinks of us. Forced. Boiled. Pity Maximo.

How much is left unsaid? Laima Vaikule let him go for a reason. After all, they really believe that they fed the USSR, and not vice versa. Hence the sense of self. Those who have worked with ABP know very well that she always treats “servants” (everyone who is not close and plays on the sidelines) as subhuman; check out the latest interview with choreographer Miguel, who has come across this more than once.

In this very place, it’s time to be outraged and stomp – what is being done? Have you already decided to crucify “our everything” from the stage? Come on, vultures. She is “just” a singer! But does she remember how Solzhenitsyn, Pasternak, Vysotsky (here is a long list of names of authors published in the USSR in millions of copies) were banned and persecuted? It is not for nothing that they even said about Brezhnev that he lives in an era (another unfunny hackneyed joke). Pugacheva – the face of the era! Don’t touch the pianist. What intelligence agencies? What are the Mossad? You’re crazy? So we will play up to the funnels and triples of the NKVD. Call Beria.

Pseudo-pacifist populism will not work in this case. Pugacheva herself agreed to canonization during her lifetime. She modestly admitted herself as a prima donna. And she upped the ante to the max. Any word, look, photo, comment, even the choice of clothing color is interpreted, discussed, interpreted, understood – Pugacheva is a super-leader of opinions, a super-authority with a fan base in the form of a huge country. Only a gesture of the artist can drive people. Zoom to one side or the other. And she knows it very well. Hence the demand. Not surprisingly, even she is seriously suspected of working with Western intelligence services. With this, everything is clear.

Aren’t we collective, exalting the undoubtedly talented artist, to whom Elena Kamburova, Zhanna Rozhdestvenskaya and Zhanna Aguzarova were not inferior at the peak of their form?

Aren’t they the ones who have fed for so many years at the hands of the most influential artist in the country? He licked her, painted icons of her, made covers and a news fan of her every sneeze and cosmetic procedure. If you count the number of headlines with the verb “rejuvenate” next to the singer’s name, you get the feeling that she is developing in the opposite direction, like Benjamin Button.

It seems that once again a wave of public indignation has run into a concrete wall with Andrey Arshavin’s philosophical motto “Your expectations are your problems.”

And there is nothing to do, lords, commoners and serfs…

Everyone gets the prima donna they deserve.

In our case, the one who calls people slaves.

And the funny thing is that there is almost no fault of Pugacheva in this.

It happens so often with them, heavenly: at some point, the border between the lyrical hero, whom everyone applauds, brings flowers and sympathizes with wet eyes, disappears. And the woman who (only) sings becomes a robed deity. You also love me for the fact that I will die, that’s all. Well, it’s normal for them. Instead of benches and an adequate perception of other people’s opinions, they have a simple Jesuit formula for all times: “clumsiness always criticizes geniuses, envying any success.” Here, too, everything is clear.

But since we’re talking about the New Year, can you make a wish?

So that at the forefront of Russian music there are no longer those who, at the first opportunity, run headlong, anywhere, to save what they have overworkedly acquired (as we remember, ABP’s honest and disinterested husband began to play after the canceled concerts, and not on February 24). So the departure of Pugacheva, Little Big, Morgenstern, Noize MC and other more popular performers, under whom the public was desperately writhing, became an impetus, a new opportunity, a cleansing, an open door for those who They had been hiding for so long. long (and some were even buried) behind the lush red hair of the collective prima donnas. So that people hear and see on the screens what they like, and not what they show in blue lights. So that those who usually spoke on the Day of the Ministry of Internal Affairs and other special services, as soon as the security forces got down to business, did not rebel against them, the security forces. So they don’t curse the army and those who do their duty and sing at public expense with bulging bags of figs. Can these be found? Nobody called for the shooting of foreign agents and their friends, just because you can live happily without their curses and poison against your native country and the “serfs” living in it?

In the catcher and the beast will come running.

Or do such miracles not happen?

PS By the way, what if Vitaly Borodin keeps his word and really provides dad for ABP? Is an artist and a citizen different?