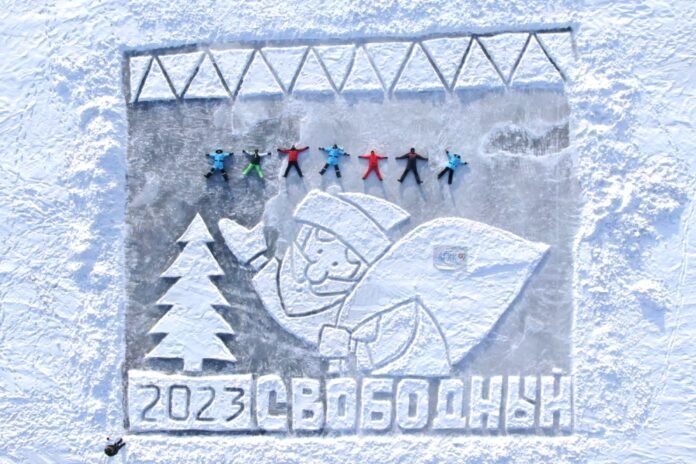 It all started in December 2017 on the winding Khomutin River near the village of Markovo, not far from Blagoveshchensk.

In the village lived a lonely deaf man Valery Konstantinovich Melnikov. Not old, a little over 60 years old, stocky and calm. He lost his hearing, and with it the joy of living, when he was 40 years old. A bad cold was treated with gallons of antibiotics, which brought him back to life, but took all sound from him.

Valery Konstantinovich divided his retirement time into two seasons: in the summer he took care of the garden in order to wind up more spaces in the pantry at the end of the season, and in winter, with the help of a broom, a shovel and a scoop, he painted huge New Year’s cards in the ice glitter. Exactly how the artists pleased the Soviet children. Then, all winter long, he went to the icy river as if he were going to work, clearing snow off postcards, trimming, polishing, and childishly resenting if naughty children tried to disturb his compositions.

Colleagues from “Amurskaya Pravda” wrote a series of reports about a lonely artist from the village of Markovo. He began a pilgrimage to his postcards: thousands of selfies scattered on social networks, children were brought to the painted ice of Khomutina, as if on a holiday. This man-made miracle was even photographed by cosmonauts from the Mir orbital station. Grandfather Valery was resurrected in spirit, journalists became friends with him, hundreds of letters and postcards came to him from all over the country, children wrote: “I want to have such a grandfather …”

Ice postcards with white snow began to be painted in all regions of the region.

The true advantage of life: an ice artist from the village of Markovo was loved by a great country and loathed by his hometown. Grandfather Valery had a character and his own opinion, he could come to the village administration and ask out loud how long stray dogs would feel comfortable on the village streets.

“He didn’t like him, and he was often called a ‘star’ in a derogatory tone,” recalls Elena Pavlova, editor-in-chief of the Amurskaya Pravda newspaper.

“Vasily Makarovich was hated the most in his native Srostki, the most evil anonymous letters came from there, they called him a liar and a know-it-all. After that, he could not find a place for himself, he smoked two packs of cigarettes a day,” he told me. Lydia Fedoseeva-Shukshina.

In the fall of 2020, Valery Melnikov’s life was cut short by covid. The first winter came without grandfather Valery.

– We understood that it was already impossible to live without ice cards. They warmed people, united them and gave joy, – says Elena Pavlova.

The newspaper became the organizer of the continuation of magical stories. She cried out: magic never dies! And people would go out on the snowy ice of the rivers of her childhood and draw …

The main symbols of Belogorsk are on a postcard. Photo: Amurskaya Pravda

The village of Stoyba is the northern Amur, extreme and fierce, where in winter frosts of minus 50 are considered quite seriously average. And here it has already become a tradition to make ice postcards. Last summer, journalists gathered in the editorial office of Amurskaya Pravda, a real club of ice artists, in which 30 people took part. People got up at four in the morning and traveled hundreds of kilometers for the sake of the communication. “And how does your paint not freeze? You heat it up with a blowtorch?!”

…And from the village of Magdagachi. Now, using ice postcard photographs, the geography of the entire Amur region can be studied. Photo: Amurskaya Pravda

This December, ice compositions shimmered on a frozen river near the town of Magdagachi. It ranks first in the Amur region in terms of the number of utility accidents per capita and, perhaps, one of the first in terms of the frequency of changes in local government. And people are drawn to a fairy tale!

Everything will be fine

The management of the Belogorsk station locomotive depot has specially changed the working hours of artist-engineers.

Fifty people in their free time make winter works of art in the lakes that stretch along the Trans-Siberian Railway.

Train passengers will admire the folk art during the long winter months. An ordinary miracle happened: a lonely man approached thousands of souls. In which there is not enough children’s tale, warmth and faith that everything will work out.

Share
Facebook
Twitter
Pinterest
WhatsApp
Previous article
Russian Defense Ministry: The wounded commander of the Shomin infantry fighting vehicle with a group of six hours defended the occupied positions KXan 36 Daily News
Next article
Where to start reading the Chainsaw Man manga now that the anime is over?