HomeLatest NewsWho was behind Putin during the New Year's speech: "extras" from the...
Latest News

Who was behind Putin during the New Year’s speech: “extras” from the FSO or real heroes 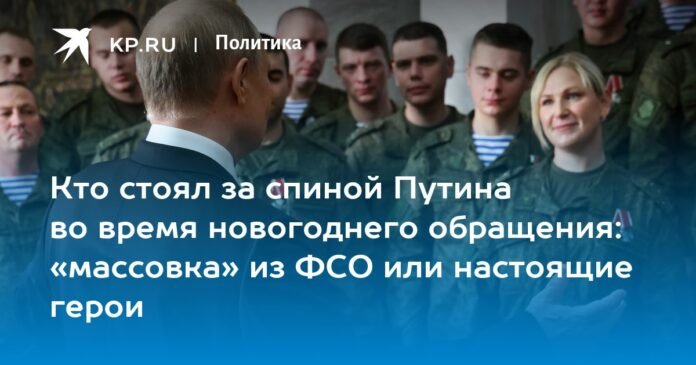 It’s amazing how far human stupidity can go. Its highest form is when the same stupidity is repeated several times. Like, for example, the legend that the crowd surrounding Vladimir Putin is played by specially selected FSO officers. Also, his command is so stupid that from time to time he slips the same people under the cameras.

The reason for gossiping about this again appeared just before the New Year, when the Supreme Commander came to the headquarters of the Southern Military District to present awards to our heroes of the Special Military Operation, record the New Year’s speech in context and communicate with military in an informal setting. One of those who received an award from the president was guard captain Anna Sidorenko. During Putin’s speech, she stands on his right shoulder. The officer unknowingly became the cause of another gossip.

During Putin’s speech, Captain Sidorenko stands on his right shoulder. The officer unknowingly became the cause of another gossip.

“Curious minds” took archival photos and gave a “feel”. Look, on a presidential fishing trip, a similar woman in the company of three other men is talking to Putin. And here is the shooting of the service in the temple, behind the president’s back are the same four, headed by a blonde. And here are the protocol shots of some kind of tea party, and again “the same thing on the sand.” Anna Sidorenko “evil tongues” was immediately assigned to the next role in the modern interpretation of the film “Ivan Vasilyevich Changes His Profession.”

There is only one truth in this false “feeling” – they are actually the same people, with the exception of the official New Year’s greetings from the president. Let’s find out. They give us three photographs as proof. The first recorded a meeting between Vladimir Putin and fishermen during a trip to Ilmen in September 2016. Among them is the owner of the fishing company Larisa Serguhina. The fishermen then told the president about his problems and asked him for help to solve them.

In the next photo, those same fishermen, together with Sergukhina, are standing behind the president in the temple. “Oh! the spiteful critics shouted. – “Fishermen” – The FIS officers were sleeping. Although, around Christmas 2017, all the media wrote that the president went to a solemn service in the Spassky Cathedral at the St. George Monastery in Veliky Novgorod. Well, since I ended up in the Novgorod region, I also called such fishermen to the service.

And after the service with those same fishermen, he sat down to drink tea and discuss how the problems that they talked about in September are being solved. Actually, the third photo is a tea party.

The woman in uniform shown for this New Year has nothing to do with these fishermen. Well, maybe something similar to Serguhina. And it would be nice if the Ukrainian media dispersed it. They throw their own, homegrown ones, and Svidomo happily picks them up. And neither one nor the other has the courage to admit a mistake.

By the way, in addition to the guards of the captain of the medical service Anna Sidorenko, behind the back of the Supreme Commander-in-Chief there were other participants in the special military operation, who were awarded state awards and valuable gifts that day. Among them, for example, Guard Corporal Timofey Matveev, who was awarded the title of Hero of Russia – the main mechanic-driver of the T-72 tank was awarded “for the repeated demonstration of courage and heroism.” Volunteer soldier Alexander Amelin received the Order of Valor from the President. Vladimir Putin hung the same award on the chest of the commander of an artillery regiment, Lieutenant Colonel Dmitry Zharkikh. The Order of Valor was also awarded to Anna Sidorenko, who carried more than one wounded from the battlefield. And she not one day she did not serve in the FSO.

The guard captain of the medical service, Anna Sidorenko, was awarded the Order of Valor.

Surrender of the Hero of Russia to Guard Corporal Timofey Matveev.