Why did the composer Mikael Tariverdiev take offense at Eldar Ryazanov? 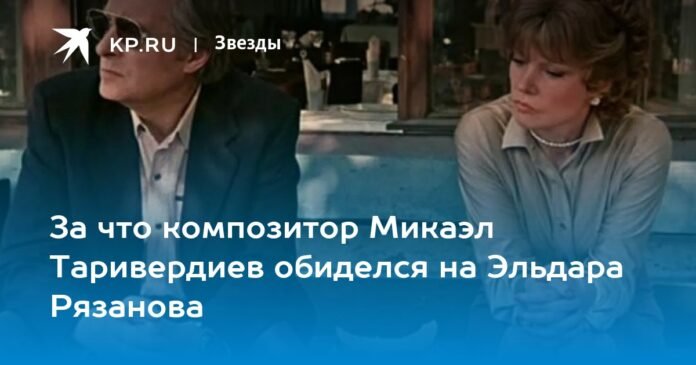 40 years ago, Eldar Ryazanov completed work on one of his main cinematic masterpieces – “Station for Two”.

This film was released on February 11, 1983 (soon we will celebrate a round date). And in the same year he became a participant in the competition program of the Cannes Film Festival. And although the Palme d’Or at that time flew to Japan for the film “The Legend of Narayama”, in the Soviet Union Eldar Ryazanov’s melodrama was appreciated.

The readers of the magazine “Soviet Screen” recognized “Station for Two” as the best film of 1983. It was watched by 35.8 million viewers. The main actress Lyudmila Gurchenko was awarded the title of People’s Artist of the USSR. And the director and performer of the main male role, Oleg Basilashvili, became “people of the USSR” the next year.

We decided to recall the most interesting facts about the making of the film.

According to one version, Ryazanov was not going to shoot Lyudmila Gurchenko as the main character – the waitress of the Vera station restaurant. After a brilliant film debut in Carnival Night (1956), where Ryazanov opened Gurchenko up for the movies, the actress seemed to be disappointed in her Pygmalion. The “subtle lyricist” Ryazanov did not accept Gurchenko’s grotesque and beneficial way of playing. She was not included in her acting cage, where Akhedzhakova, Gaft, Basilashvili, Nemolyaeva were … However, at the end of 1980, Ryazanov and Gurchenko met by chance in the Cinema House, they had a wonderful conversation. Then they accidentally ended up on vacation together in Pitsunda. And as Eldar Aleksandrovich said, he saw Gurchenko with different eyes and rediscovered her for himself. Therefore, the final version of the script was finalized for Lyudmila Gurchenko, the role of the waitress Vera Eldar Ryazanov, and the playwright Emil Braginsky “sewn” especially for her. According to the plot, the heroine of her, a village woman, meets under very unusual circumstances an intelligent pianist from Moscow. The action takes place in a provincial town. The pianist lagged behind the train, the waitress “helped” him. He was on his way to see his father before being sent to jail for a crime he didn’t commit.

Oleg Basilashvili, who played the clever Moscow pianist Platon Ryabinin, was just from the “Ryazanov clip”. He played Ryazanov scoundrels twice: in “Office Romance” (1977) and “Say a Word About the Poor Hussar” (1980). And even earlier he had to play the boring Hippolyte in the cult “Irony of Fate”. However, during the shooting, his father died, and then Basilashvili’s colleague in the BDT, actor Efim Kopelyan, died, because of which Oleg Valerianovich refused to act. And Ryazanov invited Yuri Yakovlev to the role of Ippolit.

But Ryazanov adored Basilashvili. And he took a playful receipt from the director that Eldar Alexandrovich would continue to shoot him in his films, but in positive roles. This was Platon Ryabinin in “Station for Two.”

For this role, Basilashvili lived for almost a month in a real correctional labor colony for minors in the city of Iksha (Moscow region). He needed it in order to plunge into the proposed circumstances and to penetrate the experiences of the hero. The scenes in which Ryabinin appears as a convict were filmed in the same Iksha colony.

According to the most current version, the story of a man who took the blame for a traffic accident is the story of the composer Mikael Tariverdiev. On May 9, 1967, he, together with the actress Lyudmila Maksakova, was driving a car along Leningradsky Prospekt. Suddenly, a man jumped out onto the road, whom Tariverdiev’s car had run over to death. It is unknown who was driving. It is believed that Maksakova was driving, and the composer in love with her took the blame for her. Tariverdiev was sentenced to two years, but since the investigation and then the trial also lasted two years, after the verdict was delivered, the composer was released from the courtroom. On the same day he ended his relationship with Maksakova.

Many years later, Vera Tariverdiev, the composer’s wife, said that the premiere of “Station for Two” surprised Tariverdiev. It seemed to her that everyone in the audience understood who the film was about. And now everyone is looking at him from behind. Ryazanov mortally offended Tariverdiev. In vain. It is possible that Ryazanov and Braginsky took as the basis for the script not their story, but a similar incident that occurred in 1972 in the city of Petushki.

The city of Zastupinsk, where the events of the film take place, is, of course, fictional. And he filmed it in a variety of locations. For example, the main scenes at the station were filmed not at one, but at several stations: at Vitebsky – in St. Petersburg, at Rizhsky – in Moscow, and also at the Losinoostrovskaya station of the Yaroslavl railway.

This year, the painting by Eldar Ryazanov “Station for Two” was shot again. To review it as an illustration of our life in the period of late socialism is very curious. One can only admire the courage of Eldar Ryazanov, who managed to push this “document of the time” through the barriers of Soviet censorship. He knew how to do it masterfully. He has a lot of such “documents of the time”: the satirical comedy Garage, the tragicomedy Promised Heaven …