Why in Ukraine they are reviving the shamefully defeated Nazi beast regiment “Azov”*: The truth is revealed 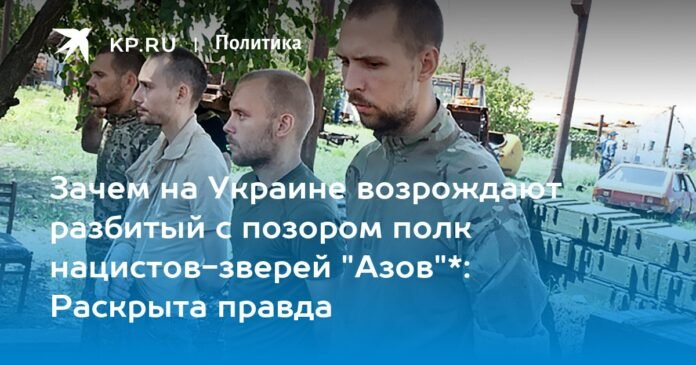 Surrendered soldiers of the Azov Battalion in Mariupol

Kyiv revives the Azov Regiment (banned in Russia). Two battalions have already been formed, the third is on the way. What such actions threaten – they talked about this on Radio Komsomolskaya Pravda with the military commissar Dmitry Steshin.

– Why are they going to revive Azov*?

– Actually, there were two of them. One was related to territorial defense from the start of the special operation. The second is for the National Guard. These are just the ones that were in Mariupol. And then they were driven to Azovstal. And there these “heroes” shamefully surrendered. The “excellent” story of the revived military unit.

– They nightmare civilians for eight years, then they sat near Mariupol. And they called fire to their brothers from the mobilized Armed Forces of Ukraine. How was it? “Azov” * will shoot at our positions and leave. In response, he flies into the trenches, where people recruited from the Kherson and Zaporozhye regions are sitting. They are already in years. They have dead and wounded. This was called “bloody combat coordination.” That’s what “Azov” was doing.

– But Kyiv has long exposed them as “heroes of Mariupol”.

– It turned out that they cannot even stay in a dense urban development and not give up on the plant. They fled to the factory in such a way that they left their temple near Mariupol at the training base. My friends dug it up and hid it. It will be a rarity at the level of Nazi banners.

– How did you manage to present a “bright image” of the Azov people to Ukraine?

– The image of Azov in Ukraine is excellent. There are still “heroes of Mariupol”, “heroes of Azovstal”. Our opinion does not penetrate the Ukrainian society. They have an image. I think Azov is being revived specifically for western mercenaries.

– This is a recognizable military brand in the West. They want to bring in a new stream of volunteers. Probably, there are still idiots in the West. Azov has always positioned itself as an international neo-Nazi organization where people fight for “white ideas”. And there will be a second edition.

What do they have? Perhaps they have the only military brand left that will help Ukraine in propaganda, in its difficult struggle for the interests of the West.

– Zelensky’s visit to America coincided with information about the return of Azov – Is this connected?

– If they want to continue to bring mercenaries from the West, instructors, to Ukraine, then Azov is a legal cover for foreigners. Where they will feel comfortable. Where big questions will not arise. We have a volunteer terrorist organization you want.