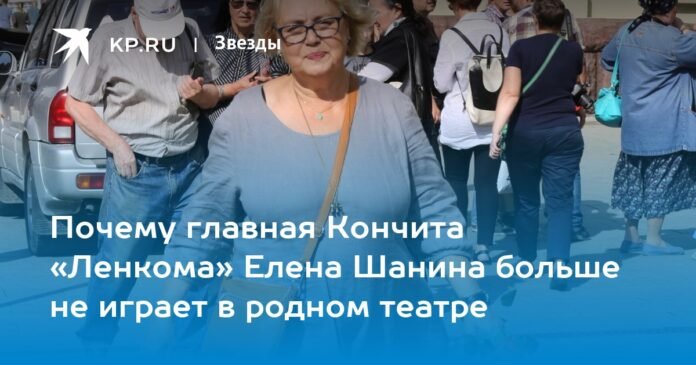 Elena Shanina at the opening of the 92nd theater season in Lenkom, 2018

When journalists talk about Elena Shanina, they always remember that she is the first Conchita in “Juno” and “Avos” by Mark Zakharov. Although the variety of her roles is enormous: from Ellochka, the cannibal in the TV movie “12 Chairs”, to the devoted Nele in Lenkom’s “Til”, from Mirra in “The Lists Don’t Appear” to Tseitl in “Memorial Prayer” and much more. plus. And yet, as much as you try to avoid the journalistic cliché, she is, above all, Conchita, tender and touching, faithful and passionate Spanish beauty with big blue eyes. After her, Alena Khmelnitskaya, Inna Pivars, Anna Bolshova, Alla Yuganova were Conchita …

Mark Zakharov saw Shanina when she was graduating from the Leningrad LGITMiK. And after a short conversation with her, the director said: “The actress is nervous, probably fine.” And when he saw her graduation performance, he invited Shanina to Moscow and immediately to an urgent entry into the play “Till”. This role was played by Inna Churikova, and she was preparing for it. But Churikova went to the shooting. Shanina had to get into someone else’s drawing in four days. She did it. From this performance, she began her work on stage with Nikolai Karachentsov. So she was already “The star and the death of Joaquín Murieta”, and “Juno” “Perhaps” “. He was the perfect companion for her and helped her a lot.

Once Shanina fell in love with the people for the role of Conchita from the touching play “Juno and Avos”.

In Lenkom, he had everything, and his favorite job. And acting demand with the previous prefix. There was no creative downtime. Fifty-two performances a month, and this happened. Elena Shanina is a 100% actress of the theater of Mark Zakharov, who gathered talented people around her and created a miracle.

In Lenkom, she met the main love of her life – her colleague Alexander Zbruev. Elena Shanina says that she caught fate by the tail when she gave birth to a daughter at almost 40 years old. I chose a child instead of releasing another premiere. Tatyana Zbrueva now also works at Lenkom. Her parents are very proud of her.

Interestingly, today Elena Shanina is not involved in the repertoire of her native theater. She plays on the side: in the performances of the Theater of Nations, in “Cabaret” and in “Canaries”. At the Center for Drama and Directing – in the play “The Old House”. She teaches classes at GITIS. And she says that she’s in that wonderful state when she finally has time to observe what’s going on around her. And every minute of the present she arouses curiosity and admiration.