HomeLatest NewsWhy the special operation dragged on and how it will end: Putin...
Latest News

Why the special operation dragged on and how it will end: Putin summed up the year 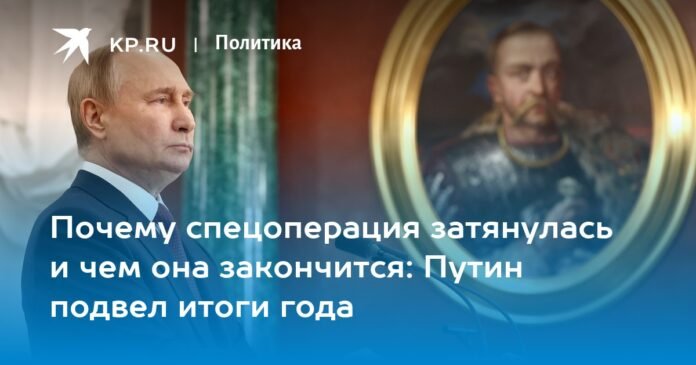 Russian President Vladimir Putin in the Kremlin during a press conference following a meeting of the State Council on the implementation of youth policy in modern conditions. Photo: Valery Sharifulin/TASS

There will be no big Vladimir Putin press conference in 2022. However, the results of the year must be summed up! And the president understood it very well. Therefore, on the evening of December 22, at the end of the meeting of the State Council, the Russian leader came out to reporters. And he answered all the most important questions for almost an hour.

In the first place, of course, there was Ukraine. Why was the special operation delayed and is it possible to force events? How will the armed conflict end? When will the parties sit down to the negotiating table? Vladimir Putin honestly shared his vision.

It was not without summarizing the economic results of the year, discussing the most prominent terrorist attacks of this year and statements on the work of the military-industrial complex. And the trademark jokes of the president, who admitted that on New Year’s Eve he was going to see his own performance on television.

We bring to your attention the most striking statements.

Of course, on February 24 of this year, no one could have imagined that the armed conflict in Ukraine could remain the main topic until December. Journalists couldn’t help but ask the president why the military was acting cautiously and whether the pace could be picked up.

– We will do our best to ensure this is completed. And the sooner the better, of course. As for what is happening and how, I have already said many times that the intensification of hostilities leads to unjustified losses. The hen pecks the grain.

There was no discussion of the latest news. Literally on December 21, it became known that the United States was ready to provide Ukraine with Patriot complexes. But this controversial decision does not scare us at all, the president believes.

– Those who oppose us proceed from the fact that this (Patriot air defense system – Ed.) is supposedly a defensive weapon. Alright, we’ll keep that in mind. And there is always an antidote. So those who do this do it in vain. It’s just prolonging the conflict, that’s all.

At yesterday’s meeting between Zelensky and Biden, they touched on the issue of negotiations with Russia. The President of Ukraine still declares that he is not going to talk about anything except restoring Ukraine’s borders as of December 8, 1991. Therefore, negotiations are not yet possible.

However, Vladimir Putin is confident that everything will end at the diplomatic table. The question is what will convince the Ukrainian regime of the categorical need for such negotiations.

– Sooner or later, of course, the parties that are in a state of conflict sit down and come to an agreement. The sooner this awareness reaches those who oppose us, the better. We have never given up on this.

In early February, everyone predicted the economic collapse of Russia. The terms varied: someone gave our country weeks, someone months. But the predictions were not destined to come true. It is that our country was prepared for the cruel restrictions of the West.

– The predicted collapse of the economy did not occur. Yes we have a reduction. Someone expected us to have a decline, a reduction in gross domestic product of 20% and more than 20%, 25%, some said. This decrease in GDP occurs, but not 20% or 25%, but 2.5%. The financial market is stable, it did not fall from the sky, it is the result of the work of the government.

The President added that at the beginning of next year, inflation should not exceed 4-5% in annual terms.

DIVISION OF RUSSIANS AND UKRAINIANS

The president also recognized the deep mistakes in the country’s long-term policy that were made during and after the collapse of the USSR. According to Putin, the United States still managed, at least temporarily, to sow discord between the fraternal Russian and Ukrainian peoples. However, our country will do everything possible to ensure that the Slavic brothers unite again.

– After all, with the help of third-party forces, and with the help of the fact that after the collapse of the Union, people of extremely nationalist views came to power (in Ukraine – Ed.), and with the help Of these forces, despite all our efforts, this disunity increased and increased. As I once said, at first they separated us, they divided us, and then they played them. In this sense, they have achieved results, of course. And in that sense, we have suffered a notorious fiasco.

One of the deputies of the tsarist Duma said: if you want to lose Ukraine, annex Galicia. And so it happened: people there behave aggressively.

WILL THE DEFENSE CARRY A NEW BURDEN?

The talk that “Russia is running out of weapons” has been going on all year. Throughout the year the empty background noise remains. Our troops used the best types of weapons when necessary.

But, of course, stocks cannot be infinite. Is it worth it to be afraid that the gun will run out? Putin thinks it’s worth it. But not us.

They say Patriot can deliver. Well, let them deliver, we will click on them.

As for our stocks, we are spending them. These are big numbers. The difference between us and those who oppose us lies in the fact that the Ukrainian military-industrial complex, if it has not been completely reset to zero, is rapidly moving towards it, and soon there will be no base of its own left. And it’s only growing for us.

PAYMENT TO UKRAINE FOR GAS TRANSIT

– Here is the aggressor-aggressor Russia, but they receive money from us for transit. We pay them. And, despite the fact that they call us aggressors, although the aggressors themselves against Donbass, and we counteract the aggression, and not vice versa, they take money. And nothing. money doesn’t smell

MAXIMUM PRICE OF GAS AND OIL

– This is from the same opera, as I understand it. Another attempt at administrative price regulation. It will not lead to anything good in the gas sector, as well as in the oil sector.

Price caps are a throwback to colonialism. The West is used to looting other countries. To a large extent, the rise of the European economy is based on stealing from countries in Africa, Asia and Latin America. The well-being of the United States grew in the slave trade, the first and the second world war. Non-market regulatory measures are the same attempt at colonial robbery.