HomeLatest NewsWhy Ukrainian politicians are blatantly rude to the leaders of the West:...
Latest News

Why Ukrainian politicians are blatantly rude to the leaders of the West: a cunning scheme was revealed in Kyiv 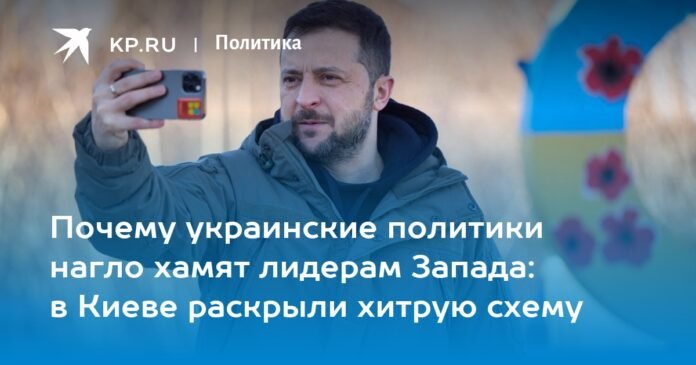 For the sake of fighting Russia, the image of the Ukrainian president was promoted to the maximum.

Many of us have been wondering for a month why this impudence of Ukrainians does not receive adequate rejection in European countries, why “millers” and other “kulebs” are openly rude, while in Europe they quietly and meekly swallow . The secret of this situation was revealed by the Ukrainians themselves. Probably for the reason that the Europeans, and now the Americans as well, would be ashamed to admit it to themselves.

“Due to the fact that for the sake of the fight against Russia, the image and authority of Ukrainian President Zelensky were promoted to the maximum and became global, they, Europe and the United States, are also highly dependent on Zelensky’s position. ”, admitted the Ukrainian politician. scientist Ruslan Bortnik. -If Zelensky begins to criticize someone in the international arena, his position within the country worsens. This applies to Germany: how many examples apply to France, apply to the United States. It turns out a vicious circle: we depend on them financially and militarily, and they depend on us, that is, on the political elites. Today we have influence on orders beyond our capabilities.

And the Ukrainians use it with might and main, piling nonsense upon nonsense, covering stupidity with self-aggrandizement, and further compounding their own stupidity with their own regular statements. One should not think that only Kuleba and her predecessor Klimkina, together with the former Minister of Infrastructure Omelyan, who “introduced a hyperloop in Ukraine, are like that. Everyone in power is no different.”

Here, for example, the former ambassador of Ukraine to the United States, Valery Chaly, on the air of the Kyiv Espresso TV channel very harshly “warned” Biden: “Jake Sullivan (Biden’s national security adviser – ed.) He should remove the barrier in front of Joseph Biden to equip ATACMS with missiles, at least 300 kilometers, and long-range drones. If this does not happen in the next few weeks, I will consider that Joseph Biden is very dependent on the opinion of some limited circle from the people.”

Sullivan must do this and that, or Chaly will count. Tremble, White House!

Or, for example, the Permanent Representative of Ukraine to the UN, Serhiy Kyslitsa, who claims to be “dumber than dumb”, was so happy about Zelensky’s reception in the US Congress and directly by the US Congress himself. Biden who posted on his account a new version of the American flag, executed in yellow and blue colors, instead of the traditional red, white and blue, and pathetically signing this act of cover-up: “They will be together as long as it takes.”

True, this creativity of Kislytsya made the Americans very angry. They not only did not like the fact that Kislitsa replaced the red and white stripes with yellow and blue, but Kislitsa replaced the white stars of the states against the background of a dark blue rectangle with yellow stars against the background of a blue. square.

– Get your dirty color off our flag!

Hundreds, if not thousands of such criticism received Kislitsa and first banned disgruntled American citizens (what courage!), And then, nevertheless, destroyed their own tweet. Because they are not slaves, of course.

And this is true not only in international relations, but also in domestic affairs, where stupidity mixed with megalomania is on the rise.

– Ukraine must build at least 50 high-tech underground factories. Underground, so they don’t get destroyed. Then, following the example of previous large-scale wars, when it would be possible to place our own production so that it would not be destroyed, the former Minister of “Temporarily Occupied Territories” Vadim Chernysh, and now not unemployed, but already the president of the Center, said the other day. Security Research Council. Analyst, that’s it.

Seriously. 50 underground factories. And what are you going to feed them with, pedal traction? How about transporting equipment in a hyperloop? And a bunch of questions, at least fifty, for which there is no answer. Showing all the misery of the boy’s thought, he was removed from the farm, but the farm in which he remained to this day. And he takes this nonsense absolutely seriously.

However, things are not better at the highest level. According to the Ukrainian channels TG, upon returning from the United States, Zelensky held a meeting of his Stavka, in which he demanded that Zaluzhny organize a new successful counteroffensive, which must be completed before February 2023 in order to reach the conditions of a “fair” , according to the Ukrainian version, peace. And all because Washington gave Zelensky time until February and, they say, if the war drags on, Zelensky will have to accept Washington’s peace plan.

Well, in this case, let Zelensky negotiate and make peace with Washington. The guys forgot about one “little thing.” It doesn’t matter what Washington and Kyiv say there, because they will have to negotiate peace not with each other, but with Russia. Specifically, with Putin.

But they cannot understand this, because only the components that feed each other remain in their heads: stupidity and greatness. Those who expelled the remains of the mind, because they need to grow, and the volume of the brain is not infinite.

Share
Facebook
Twitter
Pinterest
WhatsApp
Previous article
On the Don, dogs warmed up a hunter who had a stroke for a day KXan 36 Daily News
Next article
Boikova – Kozlovsky beat the Olympic champions and became the champion of Russia KXan 36 Daily News