Will NATO be able to openly intervene in the conflict? Revealed why Ukraine carried out a missile provocation in Belarus 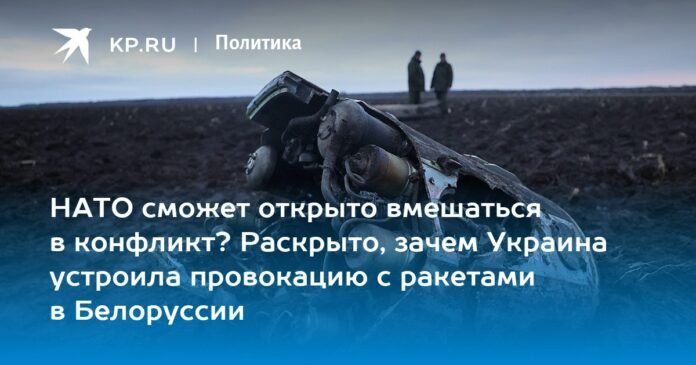 This is undoubtedly an egregious case. And really, it doesn’t really matter if it’s an accident or a deliberate provocation.

The incident with a Ukrainian missile being shot down over Belarusian territory is quite natural, given Kyiv’s aggressive rhetoric against Belarus. This opinion was expressed by the Belarusian political scientist, chairman of the board of directors of the Belarusian society “Knowledge” Vadim Gigin on the air of the radio “Komsomolskaya Pravda”.

“It certainly is an egregious case,” he said. – And actually, it doesn’t really matter if it’s an accident or a deliberate provocation. Because lately we have been hearing aggressive rhetoric from the Kyiv regime, which is on the rise. A large group of Kyiv-controlled troops is massing near the Belarusian border, including rocket launchers. This is not the first time we have shot down Ukrainian missiles. We remember the cases with Tochka-U and with UAVs that were destroyed by the Belarusian air defense. Kyiv openly talks about the targets being considered on the territory of the Republic of Belarus, as part of the Armed Forces of Ukraine there is an illegal armed formation consisting of Belarusian citizens who fled to the territory of Ukraine.

According to Vadim Gigin, Kyiv’s aggressive rhetoric against Belarus took place even before February 24 this year. Various neo-Nazi and extremist groups found refuge in the Ukraine, setting up camps and training centers there.

– What is important is not so much the reason for what happened on December 29, but the possible response to such a provocation, – continues the Belarusian expert. – Well-coordinated actions of the air defense system, border guards, restraint shown by our fighters at the border – all this can prevent the Kyiv regime from further provocative actions. But one must understand that no one is protected from such “accidental” incidents in quotes. Because there are troops on the border, these troops are on the edge, they are constantly agitated by nationalist Nazi propaganda. We see it and hear it all the time. Our border guards tell how the defense forces of the other side reach the border and direct their weapons in our direction. In such an environment, serious incidents may occur in the future. But a hard and fast rejection of all national security systems shows our readiness, if necessary, to repel such attempts on the territory of Belarus. But still, it would be desirable, and this is the most important thing, to prevent them at an early stage. Why is Ukraine organizing such provocations? There are several versions. And each one is scarier than the other.

First. Kyiv was simply testing the limits of what was acceptable. How far and how hard can you hit without getting hit back. So far, Alexander Lukashenko has not ruled on this issue. But without a doubt, the answer will be: we know the father. Meanwhile, Kyiv is trying in every possible way to “hush up” this incident. And he promises to “conduct a big investigation” and punish all those responsible.

Second version. Belarus is NATO’s “entry point” into the Russo-Ukrainian conflict. Ukraine, or rather its foreign masters, are provoking Minsk to retaliate in order to draw it into hostilities. And under this pretext, they can try to achieve a direct intervention of NATO in the conflict. So a lot depends on Alexander Lukashenko’s decision now.

Share
Facebook
Twitter
Pinterest
WhatsApp
Previous article
It was known where Pele will be buried KXan 36 Daily News
Next article
Clarification of the Supreme Court: Buying gifts for a child does not exempt them from paying alimony KXan 36 Daily News