Will Russian missiles stop the flow of Western weapons to the Ukrainian Armed Forces? What was the purpose of the attacks in Ukraine? 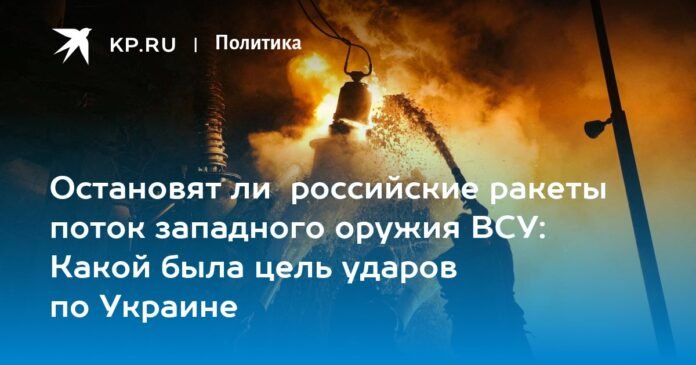 According to the Ukrainian media, the most tangible damage from Russian missile attacks was recorded in Kyiv and Odessa.

The Russian military inflicted a new powerful blow to Ukraine’s military infrastructure and related energy facilities on the morning of Thursday, December 29.

The first signs of airstrike were registered in Ukrainian cities around 9 am In Kyiv, Cherkasy, Kirovograd, Dnepropetrovsk, Poltava, Kharkov, Odessa and other regions, residents were urged to go down to shelters. In Kryvyi Rih, the power supply was cut off preemptively due to the high probability of strikes.

Just a few minutes later, reports of explosions began to arrive in the Zhytomyr, Odessa, Chernihiv and Sumy regions. It was not reported what kind of weapons were used, but according to Ukrainian media, many of the explosions were the result of Ukrainian air defense. The Armed Forces of Ukraine could not intercept all Russian missiles – in Odessa and Dnepropetrovsk, electricity was cut off. According to the mayor of Kyiv Vitaliy Klitschko, there were several explosions in the Ukrainian capital.

According to the Ukrainian media, the most tangible damage from the attacks was recorded in Kyiv and Odessa. According to Ukrzaliznytsya (Ukrainian Railways), there are significant interruptions in the movement of trains in almost all directions. It is possible that it was precisely the disruption of railway communication and the creation of difficulties for Ukraine in the supply of ammunition to the front line that was the main goal of the strikes.

By the way, arrivals were recorded not only in the central and eastern regions of Ukraine, but also in the west of the country. The mayor of the city, Andriy Sadovoy, reported about the explosions in Lvov, and there is information about “arrivals” in Ivano-Frankivsk. The Russian Armed Forces may be trying to cut off Western weapons supplies to Ukraine and thereby deprive Ukrainian units on the front line of the means to wage war.

Explosions thundered across Kharkov, Odessa and Nikolaev on December 29, 2022

Explosions thundered in Kyiv on December 29, 2022