HomeLatest NewsWin the EuroMillions by randomly buying the ticket: I just wanted to...
Latest News

Win the EuroMillions by randomly buying the ticket: I just wanted to go to the bathroom of the supermarket 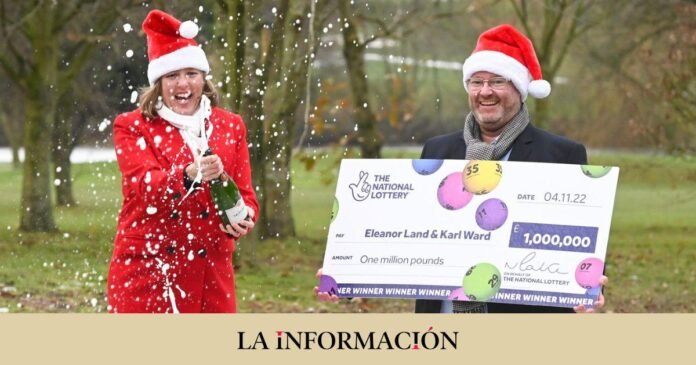 A stroke of luck, that is what is often needed to win the lottery or the Euromillions. After a Thursday full of festivities and new millionaires in Spain on the occasion of the 2022 Extraordinary Christmas Lottery Draw, the EuroMillions has returned to leave other good news.

Ellie Land and Karl Ward, from Nowich (England), won the million-euro jackpot offered by the additional EuroMillions draw, ‘El Millón’. But the most surprising thing is his story, since no one had planned to buy a ticket for that game. It was all the result of chance, and they were both going to a friend’s house when, due to an emergency, the woman had to go to the bathroom of a local supermarket.

no one will retire

That small gesture secured him a great fortune. And it is that later, he took the opportunity to make some pending purchases that were scarce at home while his partner waited. It was a quick purchase of bread and milk, but on the way to the till he opted to purchase one of these EuroMillions tickets on a whim. What he still didn’t know is that this ticket would change his life.

After learning that they were winners, the couple has already planned what they will spend the money on. “I didn’t think we were going to win a million euros,” he told the UK National Lottery, according to Evening News 24. They undoubtedly wanted to have a small detail with the employee who won them the winning ticket and who wished them luck for the raffle that night, so her first purchase was a bottle of wine for her.

Although they assure that they will not change their plans for Christmas, they have already reported their intentions with the money, especially for the new year. And it is that after many years of renting, you want to buy a house. They will also try to use the money to celebrate their wedding after 15 years together and perhaps plan a trip to France.

Neither plans to retire early, as Ward is content working as a forklift driver. “Many have asked me if Karl will take the opportunity to stop working, since he has been on the night shift for six years, but he will not,” says his partner.