HomeLatest NewsWonder Birds: how cool the Su-57s are, how they will be used...
Latest News 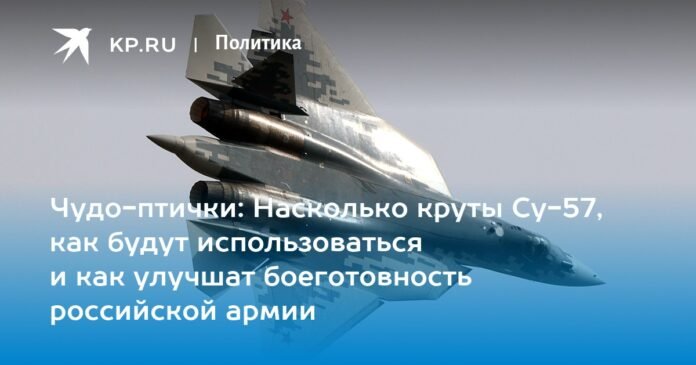 The Su-57 was created to replace the Su-27, and its operation began in 2020. Photo: Marina Lystseva/TASS

The aviation plant Yu. A. Gagarin handed over to the RF Ministry of Defense another batch of serial fifth-generation Su-57 aircraft and Su-35S multi-role fighters.

The Su-57 was created to replace the Su-27, and its operation began in 2020. But now the mass serial production of these fighters has begun. On the radio “KP” discussed the capabilities of the aircraft with a military observer Alexander Zhilin.

– Alexander Ivanovich, very interesting cars, the fifth generation, how are they fundamentally different from the previous one? How will our military be helped, especially now? Do you have any idea how many were transferred? Or is it classified information?

– From the beginning. Su-57 – the aircraft is not declassified. Therefore, we will speak carefully, but as much as possible. He’s not even a fighter anymore. This is a fifth generation aircraft, it is universal and such winged aircraft should be called aviation complexes. Since it solves almost all the tasks that are required of aviation.

– Can you destroy air, ground and surface targets?

– Marine, surface, yes. The attack power is colossal. What is fundamentally important? At one point, we were a bit behind in terms of avionics, sights, etc. Today, our scientists, I think, have accomplished a feat. Because the radar filler that is installed on the Su-57 is really unique. Imagine, the car’s glider, now I’m speaking rudely, is, as they say, dotted with sensors and is an information panel. That is, whether the aircraft is irradiated or subject to some other influence, the pilot immediately receives all the complete information. In addition, it should be noted that, starting from the Su-35, our machines use, relatively speaking, artificial intelligence and work according to the “stayer” system. That is, if the target is detected by an aircraft, it can transmit all the coordinates to the rest of the group of aircraft, and thus the on-board computer system begins to give the pilot different solutions to perform a certain task. And the pilot, of course, chooses between these. Since it is still the main one in the man-machine system. Plus. The Su-57 glider is also unique in that it is highly durable. Therefore, in fact, there is no restriction on overloads on the fuselage.

Now there are restrictions only for the pilot. And then our designers managed to bring the overload. Previously the max overload was 9 ji and now 11 ji. What does it mean? That the maneuverability of the aircraft has simply increased by an order of magnitude. This is also facilitated by engines with a controlled thrust vector.

Share
Facebook
Twitter
Pinterest
WhatsApp
Previous article
Shadayev, head of the Ministry of Digital Development: We propose that next year be the year of startups KXan 36 Daily News
Next article
Netflix has released a list of the most popular shows and movies in 2022