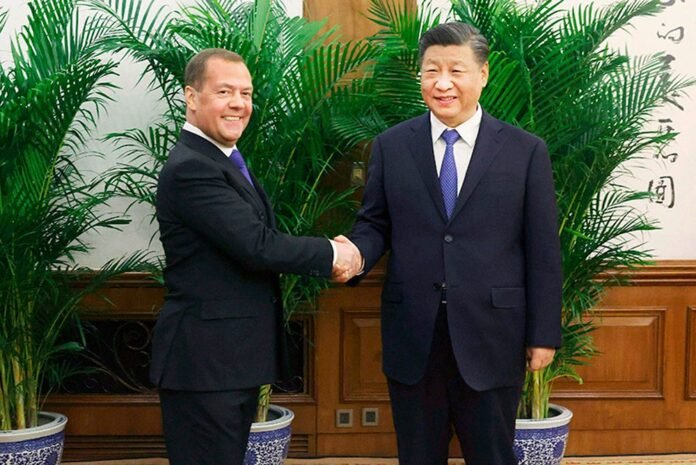 Xi Jinping asked Dmitry Medvedev to convey warm greetings and best wishes to Russian President Vladimir Putin. He said the 20th Congress of the Communist Party of China, which was held recently in China, clearly defined the tasks of building a strong socialist state in all aspects and promoting the great rejuvenation of the Chinese nation through Chinese-style modernization. The Chinese leader stressed that Beijing is fully confident that by following the path of Chinese modernization, China will bring new development opportunities to the world. Xi Jinping praised the effectiveness of the interaction mechanisms between the Communist Party of China and United Russia. He stressed that they have become a unique platform for strengthening political trust between Russia and China, promoting win-win cooperation and strengthening strategic coordination, as well as an important pillar for the long-term and stable development of Chinese relations. -Russians in the new era. . Xi Jinping stressed that the interaction between the two sides is entering “the third decade.” He expressed the hope that the CPC and United Russia will continue to exchange experiences, promote multilateral international cooperation and make new contributions to deepen comprehensive strategic cooperation.

Xi Jinping said that over the past 10 years, Sino-Russian relations have stood the test of international ups and downs, developed and continue to develop in a healthy and stable manner at a high level. Developing a comprehensive strategic partnership in the new era is a long-term strategic choice of the two countries, made in accordance with national interests. The Chinese side is ready to develop relations with the Russian side, jointly promoting the development of global governance in a fairer and more reasonable direction.

Xi Jinping said that on the issue of the Ukraine crisis, China has always adhered to a clear, independent and objective position, calling on the parties to hold peaceful negotiations. He expressed the hope that all parties can show restraint, carry out comprehensive dialogue and solve security problems through political means.

Dmitry Medvedev handed Xi Jinping a letter from Russian President Vladimir Putin, conveying his greetings and best wishes. He once again congratulated Xi Jinping on his re-election to the post of General Secretary of the CPC Central Committee, as well as the successes achieved during the 20th CPC Congress. Dmitry Medvedev noted that under the leadership of the CPC, China has made significant progress in development, which has not only improved the lives of the country’s 1.4 billion people, but is also important for the whole world. He expressed confidence that the decisions made at the congress will certainly be implemented. Dmitry Medvedev called the cooperation between United Russia and the Communist Party of China an important component of Russian-Chinese relations. He stressed that in recent years it has continued to develop at a high level. According to him, United Russia is ready to increase the exchange of experience in the field of public administration with China, implement important agreements reached by the leaders of the two countries and promote the development of bilateral cooperation in trade, energy, agriculture and others. . fields, counter external pressure and other unfair measures, seeking further development of the Russian-Chinese comprehensive strategic partnership. He also pointed out that the Ukraine crisis has a cause and is very complex, and that Russia wants to solve all the problems it faces through dialogue.

The parties also exchanged views on other global and regional issues of mutual interest.