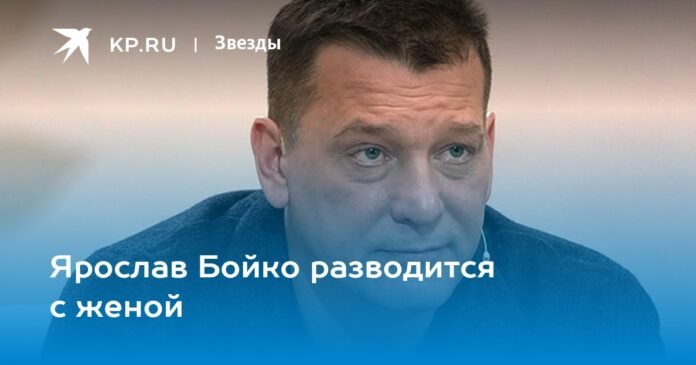 Yaroslav Boyko is divorcing his wife after 23 years of marriage, according to the Moskva city news agency. It is still unknown what exactly caused the rupture. There have been no rumors about the actor’s new novels in recent years. However, the artist has long been suspected of having a relationship with Maria Poroshina. In addition, the ex-wife of Mikhail Efremov, actress Evgenia Dobrovolskaya, gave birth to an illegitimate child from Boyko.

Yaroslav Boyko lived with the ballerina Ramune Khodorkaite for 23 years. The news about the divorce of the spouses became an unexpected bolt of lightning. An application for divorce has been filed with one of the Moscow courts, the Moscow City News Agency reports.

The couple has two children. In 1999 the son Maxim was born and in 2003 the daughter Emilia was born.

Family relationships have been difficult for many years. The wife turned a blind eye to Yaroslav’s love affairs. In 2001, on the set of the series “Suspicion”, Boyko had a stormy affair with Evgenia Dobrovolskaya. The actress gave birth to her son Jan.

Then Dobrovolskaya admitted: “I sincerely hoped that Yaroslav would part with his wife, and everything would be fine with us.”

In 2003, the film “Always Say Always” was released, where Maria Poroshina and Yaroslav Boyko played husband and wife. They showed such love that everyone gasps. Since then, fans have not tired of talking about the romance of the stars. It was suspected that even the long-awaited child from her Poroshina gave birth to Boyko.

However, the artists themselves claim that they have an exceptionally strong friendship. And recently, they are also acting in a new stage production. “With Yaroslav Boyko, we released the lyrical comedy Snow Waltz. Slava and I had the play Unfinished Romance, with which we traveled all over Russia. And now a new story about the love of two lonely people,” Poroshina said.

As for Yaroslav, he denied the rumors of an affair with Maria. The actor assured that he did not have a loving relationship with the actress.

“Once Masha went to the market, and then the third season of the series was broadcast. I deceived the heroine Poroshina. And now Masha comes to the counter, and the saleswoman says to her: “You are a fool! She cheated on you in front of the whole country. Get out of here, I won’t sell you anything”. Then, after a while, we were already shooting new episodes in St. Petersburg. We walked with Masha around the market while the lights were being prepared on the site. counters, saying, “Well, they’re finally together. It was so strange, “the artist shared the memories of him.

Share
Facebook
Twitter
Pinterest
WhatsApp
Previous article
The Luxembourg Ministry of Finance allowed the unfreezing of the assets of the KXan National Payment Depository 36 Daily News
Next article
Social Security has not suspended your health card: be careful, it is a scam