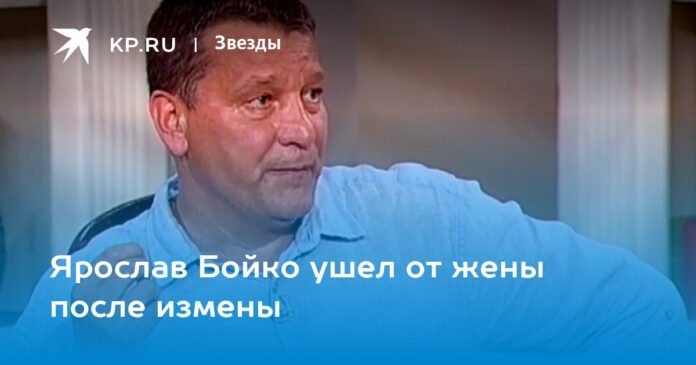 Yaroslav Boyko fans are discussing the sad news. The actor left his wife Ramune Khodorkaite after 23 years of marriage. The true reasons for the bitter parting remain a mystery. Meanwhile, people assume that the chosen one of the star of the series could not stand the betrayal of her husband. As you know, Yaroslav has an illegitimate son from actress Evgenia Dobrovolskaya. In addition, the rumors about his relationship with Maria Poroshina do not subside. Evil tongues whispered that the celebrity allegedly gave birth to her long-awaited son Andrei from Boyko.

Yaroslav Boyko filed for divorce from his wife Ramune Khodorkaite. The artist’s claim statement, received by one of the Moscow judicial districts, contains only one element – the dissolution of marriage, the Moscow news agency reports. The artist has no property claims or claims to a minor daughter. As you know, the couple have two children. In 1999 the son Maxim was born and in 2003 the daughter Emilia was born.

Now the public is wondering what caused the breakdown of a long-term marriage. Yaroslav has said more than once that he considers his family to be the main reward in life. For the sake of his wife and children, he turned down promising proposals.

A father with many children is very kind to his children. he tries not to deprive any of the children of his love. In addition to Ramune’s heirs, he has an illegitimate son, Jan, by actress Evgenia Dobrovolskaya. “I am a crazy father. But I’m very kind. The children know that I will never touch them with my finger,” he shared.

The romance between Yaroslav and the wife of Mikhail Efremov occurred in 2001, during their joint filming in the film “Suspicion”. At that time, Boyko was already raising his eldest child.

Of course, Khodorkaite found out about his lover. “Every day of married life is an act on the part of both! In our family life, everything happened: betrayal, betrayal … If you understand that you want to be with this person, then you can forgive a lot, adjust, change. If you love , the main thing is that your soul mate is well, ”said the woman in an interview.

According to the actor, his wife took the news of his betrayal calmly, and he did not talk to her about what happened, as if nothing had happened. “I don’t remember the words my wife told me when she found out about her illegitimate child. We didn’t even discuss this situation with my wife. Anything happened… My wife never showed that she was jealous,” the artist confessed to Boris. Korchevnikov.

By the way, several years passed before Yaroslav recognized the heir. Jan is very similar to his father and followed in his father’s footsteps. He is pursuing a career in film and theater.

Boyko also talked about an affair with Maria Poroshina. According to him, there has never been a love relationship between them, they are family friends and support each other. “They credited us with a novel, and she even had to deny it… But I take these rumors in stride: I’m used to it…”, Boyko summed up.