HomeLatest News"You will be offered a choice": a statement was made about the...
Latest News

“You will be offered a choice”: a statement was made about the future of Alla Pugacheva 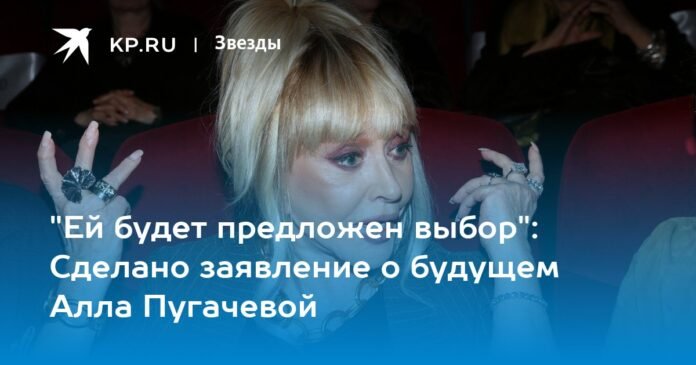 In 2022, even loyal fans began to condemn Alla Pugacheva. All because she moved to Israel, where she decided to “sit” Pugacheva with her husband and children from her. The singer took the children’s documents (twins Harry and Lisa Galkin are 9 years old) from school and flew to Israel on a private plane. Pugacheva still lives in the house of her husband’s brother, but they talk about the imminent purchase of her mansion. Alla Borisovna never publicly reports her mental anguish. But it is obvious that they exist and the decision to move was not an easy one.

Honored Artist of the Russian Federation Vyacheslav Manucharov expressed the following thoughts about the People’s Artist of the USSR Pugacheva: “What is it like to leave at the age of 73, being a legend and property of the country, having bought a one-way ticket? Don’t go because it’s bad. Not because they don’t like it. But because the husband suddenly decided to become the “conscience of the nation”… When he openly opposed the special operation, filling his posts with fakes, did he think of his wife, who, of course, is incomparable in scale with him? ? About whether he wants to spend the rest of his life in exile. Does he want to leave the country where he became an idol, go to a remote Israeli village and disappear into oblivion? It’s a pity that, it seems, the husband did not even leave the legend a choice … After all, without a doubt: Alla Borisovna, a person who is not in the best of health, is very worried about what it’s happening. Concerns about separation from the Motherland and compatriots … ”Many supported Manucharov’s thoughts. Some of Pugacheva’s fans believe that the singer went after her husband so that the children were next to her father and next to her.

Astrologer Tamara Globa, in an interview on Komsomolskaya Pravda radio, answered a question about the near future and the choice of Alla Pugacheva. Alla Borisovna will be 74 years old on April 15, 2023.

Tamara Globa says that fans still sympathize with Pugacheva. This is understandable: many grew up with her songs and associate the artist, first of all, with her work, and not with the actions she takes after she finishes her career.

Tamara Globa’s forecast of a difficult moment in Pugacheva’s life in 2023: “There may be a moment of critical choice… When she is offered a choice, literally on her birthday. And after that, difficulties may arise related to her affairs, her finances. I think this is a very important period for her. Since big changes will already begin in terms of her life, affairs, health and, in general, her position in society. And this will happen from mid-2023. And for the next two years.

According to Tamara Globa’s forecast, Pugacheva will make the final decision on her future in mid-April 2023: “This moment of choice will be very important. Because I think the question of return is natural for her. She wants to come back, she needs him. But probably, in many ways, this flow will only be possible from 2024…”

Who recruited Alla Pugacheva, who fed the USSR? CIA, Mossad or MI6?