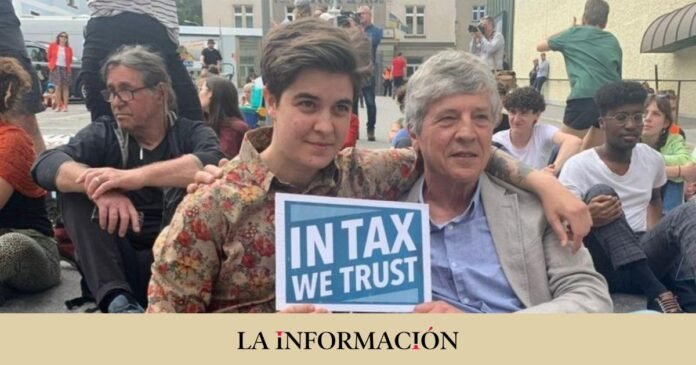 It seems fiction, but it is not: there are those who want to pay more taxes. This is the case of a group of young millionaires in Germany. They are heirs to great fortunes and, a few months ago, they launched the German ‘Taxmenow’ movement, which advocates an increase in the tax rate for the rich. One of the forerunners of this association was Marlene Engelhorn, who denounces that the current tax legislation encourages the dynastic transmission of large amounts of wealth, but also of power.

This small group of super-rich young people were the protagonists of the latest edition of the elitist Davos Economic Forum, also called the Davos Forum, which is held every year in Switzerland. In a sit-in that followed a demonstration, they called for a tax increase on large fortunes. For Engelhorn, a descendant of Friedrich Engelhorn, the founder of the German chemical and pharmaceutical company BASF, the world’s largest chemical corporation, “it is not a matter of will, but of justice.”

She has been joined by other millionaire heirs, such as Phil White, whose fortune comes from business consulting. The British demand that the richest be taxed and demand a change in the annual meeting of the Davos Economic Forum, so that those who know the most about the economic impact of the crisis are included.

What does the ‘Taxmenow’ initiative consist of?

In February 2021, the German association ‘Taxmenow’ was born by Marlene Engelhorn and many other rich young people. For this movement, wealthy people are those whose assets are equal to or greater than 1 million euros. And they far exceed the requirements to enter that exclusive group.

From the entity, they demand that the State keep a greater amount of the patrimony they have inherited, so that it distributes them in a democratic way. To do this, they have started a campaign to collect signatures that calls for improving tax justice. At the moment, they have already achieved more than 80,000. Of these, 62 belong to millionaires.

Specifically, they request that wealth tax be applied to assets valued in millions and thousands of millions of euros, that exemptions for business assets and progressive tax rates be limited, compared to the single rate for capital gains tax. “Greater tax justice is the path towards a society oriented towards the values ​​of the common good, equal opportunities and cohesion”, they explain on the ‘Taxmenow’ website.

Who is the millionaire Marlene Engelhorn?

A few months ago, Marlene Engelhorn gave news that revolutionized the world: at the age of 29, she announced that she wanted to donate 90% of her inheritance. “I have not worked a day for my inheritance and I do not pay a penny for it. It is high time that they make me pay taxes”, she declared to the German newspaper ‘Frankfurter Rundschau’. The Austro-German is the descendant of Friedrich Engelhorn, the founder of the German chemical and pharmaceutical company BASF.

“It cannot be that self-proclaimed elites develop in a democracy. For me it is not a question of why I give it away or not. It is outrageous that it is not taxed and made available to the public treasury, ”he said. Friedrich Engelhorn, who died in 1902, left his descendants an immense fortune. Marlene’s grandmother, Traudl Engeldhorn-Vechiatto, met one of his great-grandchildren. On his death at the age of 95 on September 22, she became a billionaire as Marlene. Since then, she has campaigned for system change on distributive justice.

Although he still does not know how much money is involved because they have not yet read the will, Engelhorn acknowledged to the French newspaper ‘Le Monde’ that “it is probably tens of millions of euros.” According to the calculations of the American magazine Forbes, his fortune would amount to US$4.2 billion.

Who is the millionaire Phil White?

In that group of millionaires who supports this initiative is also the British Phil White. Alluding to the Davos Forum, he criticized that “while the rest of the world collapses under the weight of an economic crisis, billionaires and world leaders meet in this private room to discuss things that will make history.”

The origin of White’s fortune is in business consulting. “It is outrageous that our political leaders listen to those who have the most. They are precisely the ones who know least about the economic impact of this crisis and many of them pay incredibly low taxes. The only credible outcome of this conference is to tax the richest and do it now,” he recounted. On several occasions, the representative of the group called ‘Patriotic Millionaires’, has expressed his desire to join anti-poverty activists who defend change at the annual meeting of the Davos Economic Forum because, in his opinion, the current economic system is failing .