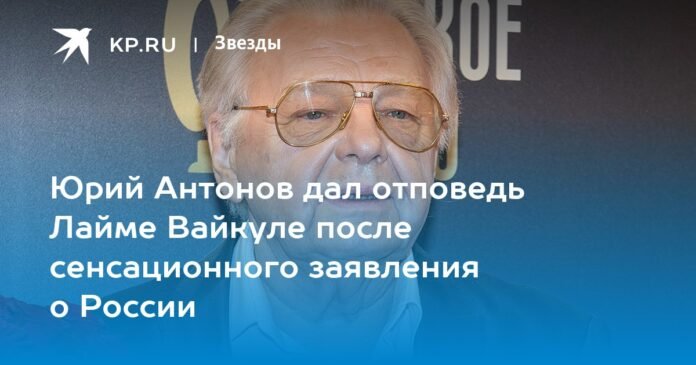 Many have already forgotten the recent confession of Laima Vaikule, in which she stated that she “supported the entire Soviet Union, and Alla (Pugacheva) supported all this Russia, which is now presenting her with something”… But the singer Maria Maksakova, who left for Ukraine, remembered this.

68-year-old Laima Vaikule claims that, receiving 17 rubles for a concert, she collected stadiums of spectators: “Count how much money I brought to the state. For the disc released by Melodiya, which was sold in the USSR with a circulation of 20 million copies and sold for 2-3 rubles, I received 137 rubles.

On social networks, people, of course, lowered her from heaven to earth: “Russians paid you a ruble for tickets. If it were not for them, who would you and Alla need? Besides the Soviet Union, where else do you know? How many millions did you earn in Russia on concerts and corporate parties?!”…

Suddenly, the singer Maria Maksakova joined this discussion and reminded of herself. She confirmed: yes, Laima Vaikule “supported the Soviet Union.” “I will say more: Lyme was supposed to become the brightest star on Broadway,” Maksakova dispersed. – But it did not fit into the Soviet aesthetic. The Soviet Union owes you not only unpaid dues, but much more.

We asked musician, composer and singer Yuri Antonov to comment on these strong statements from slightly forgotten singers. Firstly, unlike Maria Maksakova, Yuri Mikhailovich not only lived, but also worked in the Soviet Union (when the USSR collapsed, Maria Maksakova was 14 years old). He knows how much artists were paid for concerts and records, how much the state took. Maybe it’s true: Laima Vaikule supported the Soviet Union, and Alla Pugacheva supported Russia.

– I perceive these words of Laima Vaikule as the stupidity of an old woman. First of all, she refers to Pugacheva and says that Alla supported Russia, while Pugacheva did not say this. Second, who is Laima Vaikule even in the context of our scenario (not to mention the world)? Yes, nobody. When she talks about herself (and, separated by a comma, about Pugacheva-Ed.), she tries on a royal robe that she has never worn.

– She says a little about something else, that in the Soviet Union artists were paid little. Most of the income from concerts, record sales was taken by the state…

– Not only artists, everyone was paid little then. But no one died of hunger. What kind of big profits are we talking about if Laima Vaikule has never been included in the category of top artists? Outwardly, she is very pretty, I do not argue. She knew her well.

In 2009 I performed in Jurmala with a solo concert. Russian pop stars sang my songs there. And Laima also sang my song. But she has always been a medium-sized Latvian singer.

Listen, Latvia is a small state. They have no one but Laima Vaikule and Raymond Pauls.

Yes, Raymond Pauls is a great pop songwriter. And a very good pianist. And Vaikule played a certain role in the development of the chanson, so it would define its place and style.

There is nothing to comment here. She did her job. Thank you for this. And good bye. There is no need to be rude, insult. It’s just that after such statements from you, one must politely say: goodbye, Lyme.

– What does it mean?

This means that we will never see each other again.

Times are tough for our country right now. But believe me, we will get out of this situation. And all those who now say abusive words against our country and people living in Russia will bitterly regret what was said.