Zavorotnyuk, Guzeeva, Varum – who in show business entered the New Year in debt 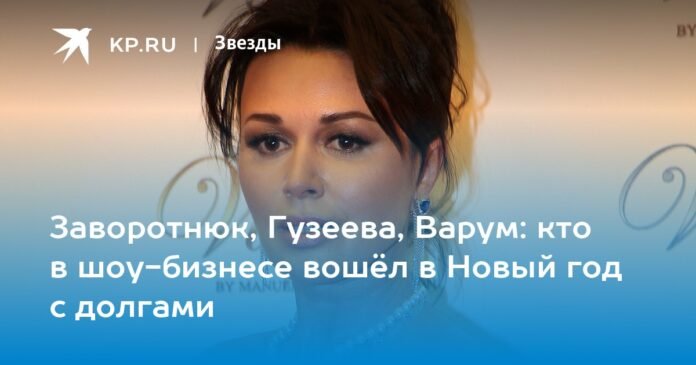 Anastasia Zavorotnyuk’s debts have accumulated for many years.

A well-known sign – as you celebrate the New Year, so will you spend it – causes superstitious people to pay off their debts until December 31. But it seems that some stars are not afraid of empty pockets… The KP.RU website found out who in our show business entered 2023 with a financial gap.

So, for example, Philip Kirkorov only partially covered his tax debts. If at the beginning of December the unpaid bill of the king of pop for houses, apartments and cars was 7.067 million rubles, today Philip Bedrosovich owes 6.029 million to the former president of Kyrgyzstan Askar Akaev for 1 billion rubles.

However, the practical Kirkorov does not pay on purpose – the singer, having obtained the support of lawyers, hopes that the court will reduce the cadastral value of the apartment and, accordingly, the corresponding tax. Whether this case will pan out, we’ll know soon enough: the celebrity owner’s claim conversation is scheduled for January 24.

Anastasia Zavorotnyuk’s debts have been accumulating for many years: the tax service is waiting for the seriously ill actress to pay bills for 150.9 thousand rubles: this is a transport tax, land payment, fines, penalties and premiums insurance. . Some bills have been gathering dust since 2014 and have already been delivered to the bailiffs. However, the family has not lived up to these trifles for a long time: the actress’s husband, figure skater Pyotr Chernyshev, spends all the money earned on her treatment and rehabilitation. For participation in the Tatiana Navka show on the New Year holidays, Chernyshev will receive a fee of more than 3 million rubles. There is no doubt that these proceeds will be used to pay bills in an elite oncology clinic, where, according to KP.RU, the “beautiful nanny” has been since September last year.

There are several more “hundreds of thousands” on our “black list”: for example, Agata Muceniece underpaid to the Federal Tax Service 116.5 thousand (of which 102 thousand are transport taxes for 2021). Bari Alibasov, who has disappeared from the radar, owes 115.5 thousand in property payments, and producer Igor Matvienko has an outstanding fine of 100 thousand.

The rest of the famous penalty box has five-figure sums. Rapper Eldzhey (in the world – Aleksey Uzenyuk), for example, did not report 87.5 thousand to the Tax Office (of which 72 thousand is a bill for a car); Angelica Varum forgot about the payment of 21 thousand, and Larisa Guzeeva – about 12.6 thousand.

Gradsky’s relatives agreed to the division of property.

Soon after the death of Alexander Gradsky, it became known about his tax arrears of half a million – the amount of various property amounted to 527 thousand rubles. Experts then warned that these bills would remain unpaid until the warring relatives agreed to the division of numerous properties. Like, what’s the point of paying for something that can then go somewhere else?

In fact, for several months the master’s debt hung like a dead weight. However, today only 37 thousand rubles are expected from the late Alexander Borisovich. Thus, the family has already transferred almost half a million to the Federal Tax Service. So, despite the deadlocked trials, the young widow and the eldest children of the artist agreed on the division of the inheritance, the details of which the general public is unlikely to shine.

Meanwhile, according to KP.RU, the eldest son of the singer himself Daniil Gradsky owes the Tax 57 thousand rubles.