HomeLatest NewsZelensky and Netanyahu did not please each other. Negotiations between the...
Latest News

Zelensky and Netanyahu did not please each other. Negotiations between the two leaders ended in failure 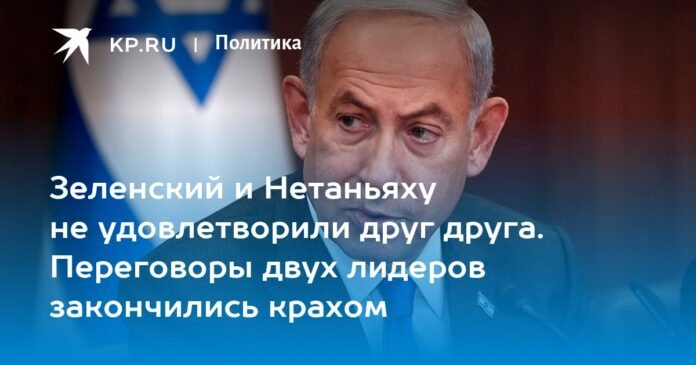 Before the New Year, telephone conversations took place between the President of Ukraine, Volodymyr Zelensky, and the new head of the Israeli government, Benjamin Netanyahu.

Before the New Year, telephone conversations took place between the President of Ukraine, Volodymyr Zelensky, and the new head of the Israeli government, Benjamin Netanyahu. Both needed something important and non-standard from the interlocutor.

Netanyahu, for example, expected Ukraine to vote against the anti-Israel resolution adopted by the UN General Assembly on the status of the Palestinian territories. A very difficult task, given that out of nearly a hundred votes on such resolutions, Ukraine has never sided with Israel. Most of the time he voted against, but sometimes he abstained.

Zelensky from Jerusalem required the supply of air defense systems, in particular, the Iron Dome system. Kyiv has been pestering him for more than a year, but after February 24, requests for delivery (not even for sale, since Kyiv has no money for Iron Dome) turned into an obsessive “thinking solution.” “, roughly like Hitler’s dream of a “prodigy”. ” Expert opinions that this air defense system would be useless for Kyiv were dismissed one after another.

In general, the parties started from such initial positions. Zelensky was clearly in a losing position, because Netanyahu is that beast, none of the piquets would put a finger in his mouth (even if Benjamin had agreed to this, which there is strong doubt). Netanyahu was in charge of the country when Zelensky was still walking to the piano on foot. Also for the reason that the vote was scheduled for a specific date, and air defense assistance is a problem that cannot be solved with a hint. There is a citizen and Mr. Biden promised “Patriot” to Kyiv, and now it turns out that there are still 50 weeks of training left for Ukrainians to work and repair complexes. And only after that the American ZRPK will go to Nezalezhnaya for combat duty. If, of course, there is where to get up and where to insert these missiles.

In general, Netanyahu promised to think about and discuss Zelensky’s issues at some later point in the future. Clearly counting on the satisfaction of his request, hinting at this. But Zelensky did not promise anything, and as a result, the permanent representative of Ukraine to the UN simply did not vote. No way.

“Zelensky has decided that we will not be present at the vote in order to give the relationship with Netanyahu a chance,” an anonymous Ukrainian official told Axios, who prepared the material from the early talks, summarizing the conversation with a brief summary. . – The two leaders were not satisfied and did not get what they wanted.

The most interesting thing happened later. Following these telephone conversations between Zelensky and the current Israeli prime minister, the new Israeli foreign minister, Eli Cohen, announced that “Israel has resumed direct contacts with the Russian Federation at the highest level and intends to speak less publicly about the Ukrainian-Russian question. .”

– On the Russia-Ukraine issue, we will do one thing for sure: speak less publicly, – Cohen said, but publicly emphasized that he would continue “significant humanitarian assistance to Ukraine”, but refused to answer all questions about the supply of weapons. to Kyiv.

It is clear that Israel is constrained by relations with Iran on this matter, but it seems that even without this, Netanyahu has concluded which of the negotiators is a priority. At least from opposite sides. In addition, Netanyahu has known Putin for a long time and from his own experience he was convinced that it is difficult to get a promise from Putin, but if the president of Russia has already given his word, he will do everything possible to fulfill it. . And with Zelensky, it seems, there is no such trust. Which, by the way, he demonstrated with his behavior.