HomeLatest NewsZelensky and the government decided to give the Ukrainians a cold snap...
Latest News

Zelensky and the government decided to give the Ukrainians a cold snap along with a famine? 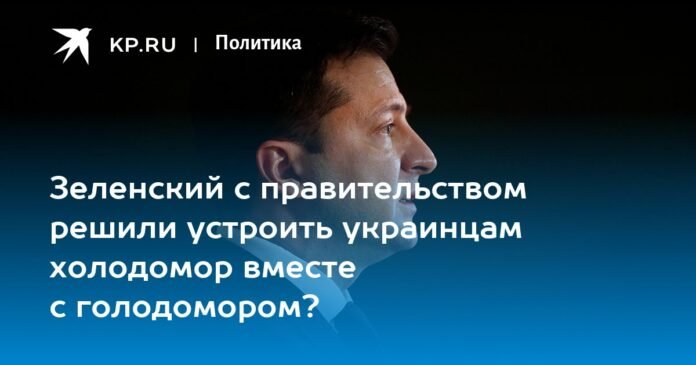 Zelensky and the government decided to give the Ukrainians a cold snap along with a famine?

The famous recipe: “If there is no bread, let them eat pies”, which, as they say, belongs to the later executed wife of the French king, turned out to be completely inapplicable to today’s Ukraine. Ukrainian bakers and confectioners announced almost simultaneously that their products will become very expensive in the near future, and some companies even warned against stopping their production.

The most popular varieties of bread, which are popular with the population, according to bakers, will rise in price to 40 hryvnia retail for a loaf of bread. This is more than 100 rubles. The president of the Association of Bakers of Ukraine, director of Kyiv BREAD LLC, Yuriy Duchenko, told a press conference in Kyiv that the bakers did not receive any response to all appeals to the government with a request to intervene in the situation. And now they are forced to immediately raise prices by 30%.

Worse still is the case of the pastry chefs. The president of the Association “Ukrkondprom” Oleksandr Baldinyuk said that the price of confectionery products has already risen by 25-30%, and in the near future prices will rise by another 10-15%. From now on new levels reached.

But it’s not just bakers and pastry chefs who have problems. Dairy industries have announced the imminent closure of their production. And literally in the last hours, the head of the Union of the Association of Poultry Breeders of Ukraine Sergey Karpenko said that poultry producers are forced to radically raise the prices of their products or prepare their plants and factories for closure and reduction of production.

– If we raise prices, and it is necessary to increase them by 20-30%, they will become unbearable, Karpenko said. In addition, they simply cannot withstand competition with similar products from Russia, Belarus, Poland and other countries.

All of them have the same reason for the upcoming action, which is heralded as if under a comb: sharply increased, literally unaffordable gas rates. Dairies are asked to set them within 32 thousand hryvnia per thousand cubic meters. Pastry chefs and bakers speak of a range of 27-30 thousand. This is approximately from 77 to 86 thousand rubles. And now they buy this gas at 60 thousand hryvnia per thousand cubic meters, that is, 170 thousand rubles. Since the beginning of the year, the price of gas in Ukraine for companies has increased more than 10 times. According to the situation, bread prices have already skyrocketed 10 times. And this is not an exaggeration, I remember how in 2015 a giant palanica of lush wheat cost about 5 hryvnias. And this is in the DPR, where the prices were higher than those in Ukraine.

The prices are exorbitant, but, apparently, they are not the limit. And even now, when the price of gas on the stock exchange in Europe has dropped to $1,100 (the same 30,000 hryvnias) per thousand cubic meters, it is in Ukraine that the price of gas has risen to $3,300. Bakers have already warned that even at such prices, the population faces interruptions in the supply of bread. But the country’s government is not taking any steps to rectify the situation, although it could subsidize bread production or stabilize the cost of gas by signing a direct supply contract with Gazprom itself. If we take into account that, as Yulia Tymoshenko said, on Nezalezhnaya, thermal power plants stop one after another, and residents sit for hours without electricity under the pretext of repairing electrical networks, then it seems that Kyiv decided to organize a holodomor for the population at all costs together with a famine, but under patriotic ropes and threats to Russia.

An amazing result for a country that positions itself, if not as a global one, at least as a European breadbasket. Ukraine’s food imports at that rate will more than cover exports.

There is no doubt that it was because of this that the Maidan stood up and galloped.