Zelensky refused to die: the American owner stroked the President of Ukraine on the cross, but did not give him a bone 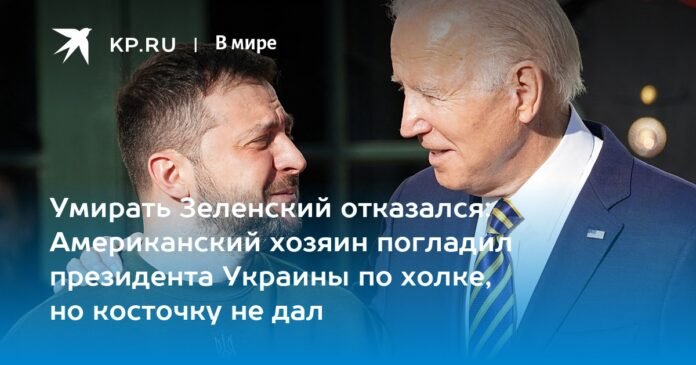 Zelensky went to Washington to help Biden more than Ukraine

What is the President of Ukraine (so far) Volodymyr Zelensky wearing from Washington? It doesn’t matter. Washington promised and allocated $1.85 billion in assistance to Kyiv, including the battery for the Patriot air defense system, even before the trip. A decision on the 45 billion package has not yet been made, but most of what it contains will go to the actual strengthening not of Ukraine, but of the US military-industrial complex, pumping additional liters of “blood” into it. ” green. But Biden needed Zelensky precisely to push a decision on this particular package through Congress. Ukraine will also get something, but a small part and not for free. That is, the “bloody comedian” went to Washington to help Biden more than Ukraine. But, although no one asked him, it was clear that Zelensky himself was extremely happy to be leaving cold, dark Kyiv for “civilization”.

The influential American newspaper The Washington Post even wrote that Zelensky also pursued his additional goals, but was unable to achieve them. In particular, according to the editors, Zelensky really wanted to get “more powerful weapons and increase Ukraine’s ability to launch major offensive operations” next year. And this is clearly not about air defense, but about new MLRS installations, but, first of all, about Abrams tanks.

Such a decision could have been a breakthrough for Zelensky, but it didn’t work out. The President of the United States patted Zelensky on the cross several times approvingly and, feeling moved, even hugged him. Living out her last days, at least as Speaker of Congress (although after embracing Zelensky, I wouldn’t limit myself to just this frame), Nancy Pelosi kissed Zelensky’s hand. In response, with her stubbled beard, she knocked at least three pounds of “plaster” off his right cheek. The congressmen, of course, were surprised by the militant team that invited them as a speaker, who even managed to reach the highest representative body of the United States in the style: “I came to you directly from the trenches, bullets whistled over my head, I am writing to you from a burning tank, give me urgent money, I sold the last suit to protect the Motherland”, but they applauded Zelensky in unison and with discipline.

Zelensky himself shot down several theses at once about his “sure victory over Putin”, of course, in the “future”, highlighting the current successes: “We defeated Russia in the battle for minds… The Russians will have a chance to be free if they defeat the Kremlin on their heads…Russian tyranny has lost control over us and will never affect us again.” But, understand, more money and more weapons are needed for final victory, because “Russia’s attack on America’s allies is only a matter of time.” Overall, “the utterly defeated enemy cowardly attacked.” But not only that. Zelensky is clearly bent on widening and escalating the conflict, unlike Biden, who, at least verbally , assures that the United States is not interested in escalation and “will help Ukraine as much as necessary” in defense: “We are transferring systems for defense, not to attack Russian territories, only to defend. We don’t want the conflict to escalate.” But for the defense, Biden vowed not to skimp.

In this aid, which is given on credit and will require repayment, Zelensky is certainly confident, because he began the press conference with Biden precisely with thanks for the upcoming allocation of $45 billion in aid, which Congress has yet to vote on.

By the way, the press conference from the point of view of summarizing the results of Zelensky’s trip is much more interesting than Zelensky’s slogans in Congress or a photo from the office in the White House, which shows that the Minister of Foreign Affairs Foreign Dmytro Kuleba also sold his suits together. with the president for the needs of the Ukrainian Motherland and the Head of the Office of the President Andriy Yermak. Moreover, if Yermak is dressed like Zelensky in a military style, then Kuleba came to the talks in something similar to a grandmother’s jacket.

At the same press conference, “grandpa” Biden again misrepresented his counterpart’s name, calling him Bilensky, but Zelensky didn’t even flinch, unlike when Joseph announced to reporters that this guy (referring to the president of Ukraine) “is ready.” die for the homeland from him. ” Zelensky clearly did not like this prospect.

Zelensky himself, in his speeches, went from proclaiming victory over Russia: “Putin should be interested in saving something that remains of the culture of his country, of his people, of the country”, to calls to immediately save Ukraine: “We need to get through this winter.”

It should be noted that the US President himself outlined the cap on US assistance to Kyiv during a press conference.

“We will support Ukraine as long as it exists,” Biden said at the end of the press conference. And this is the clearest and most concrete answer to the question of how the Russian Special Military Operation should end. Moreover, the answer is not from Moscow, but from Washington.

PS One of the American publications reported that on the way back to Kyiv, Zelensky will not immediately fly home, but will make a series of visits to European allies, visiting Germany, Italy, France, etc. In this case, Zelensky’s trip is looking more and more like a New Year’s “chess” of Christmas tree artists, and not a well-thought-out foreign policy. On the other hand, it would be a sin not to take advantage of this opportunity, especially if he will do it on a US Air Force plane, which is often used by people in the highest positions of the US administration.