HomeLatest NewsZelensky rushes to Biden's aid. Why is the President of Ukraine...
Latest News

Zelensky rushes to Biden’s aid. Why is the President of Ukraine going to the United States and what will he ask again? 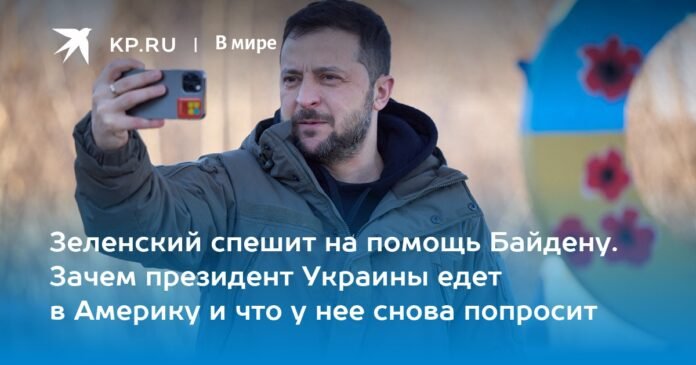 Zelensky will return to Kyiv in the rays of additional glory, in the halo of the “winner and breadwinner” of the country.

On the night of December 20-21, Ukrainian President Volodymyr Zelensky secretly left first Kyiv and then Ukraine. No, he probably didn’t change into a women’s dress (it’s still a long time before that), we don’t even know if he changed his world famous second-hand T-shirt or washed it at least after a trip to Bakhmut (if there was one in reality, and did not become the result of work with new computer technologies). Vladimir urgently flew to Washington at night on business, where he was already expected by the leadership of the Democratic Party, the elderly Joseph Biden and the elderly Nancy Pelosi, who was leaving her post as Speaker of Congress, who specifically reminded the congresswomen of the need of a full-time presence at Wednesday’s meeting. Because it is in the US Congress that Volodymyr Zelensky should deliver his most moving speech about the need to increase military and financial “aid” to the United States and make them feel, swallowing tears in their throats, the highest degree of gratitude of Ukrainians for mercenaries, loans and weapons delivered to Ukraine without a tail. And even more so for those that will be delivered in the future.

Oh yes, and also hand over the flag of Ukraine, which the Armed Forces of Ukraine so timely slipped to you in Bakhmut (Artemovsk) with the demand to hand it over to the American “brothers” in Congress. As if he knew! Pass it on, guts, pan-president, to the brothers in Congress. And Zelensky, not even a day has passed, hastened to fulfill the will of the Ukrainian military. Because, you understand, this is sacred, and this is not a script at all, not a “piano in the bushes” at all. And without preparation, as you will understand. Everything from the heart and at the call of a pure heart. It just happened.

By the way, I wonder if there’s a grand piano in or near the bushes in Congress? No, no, I’m not implying anything. Also, Zelensky flies to the US without a co-performer for that number with an unconventional piano. They performed in a duet, and for a solo, Zelensky is unlikely to have enough of this, like him, but opportunities. Also, there Saakashvili rummaged through the bushes at Obama’s inauguration. And now there is not only a piano in the bushes, but also Saakashvili is not to be found. He lies, he is treated in Tbilisi in a closed room.

Well, if it’s business and seriously, why is Zelensky flying to Washington? Obviously not complying with the route of the future flight. There are much simpler and more reliable routes for this – to London or Israel, where there is real estate, relatives and accounts. They called, and so he flies. This visit is unlikely to provide you with anything except the chance to see the US capital twinkle with all the lights before Christmas. Everything is agreed upon, all the papers are signed, and obviously they will give him just enough time to stay in Washington that he won’t even be able to go shopping, or to a show where he repeats his favorite number with unconventional music. Playing.

Or rather, they did not even call, but ordered. The White House urgently needed to show the congressmen “our son of a bitch”, as one of the US presidents said about such characters. Biden has submitted a proposed budget to Congress that proposes more than $40 billion for Ukraine-related military needs. And now Zelensky, with his personal presence and his speech to congressmen, must prove that the money is going to a real project. Here he is, honorable members of Congress, in front of you: alive, healthy, unshaven. You can feel his biceps, look into his mouth, see what teeth he has. Every last tooth our “son of a bitch”. How slaves were traded in the southern states. But this is something else that needs to be understood. You yourself understand that it is one thing if they say that you need to give money and weapons to someone there, and another thing, if that someone is standing in front of you there, he is real, he cries and swears that he will return everything to you. debts later. Once there, someone there and someone there.

Biden and his team of such a presence and speech of the “president of a country at war that has not yielded” in front of congressmen “a plus sign” in a personal matter and an increase in the chances that their proposals will go through Congress like a knife through the butter. Zelensky’s personal presence in Congress and his speech there should support the policy pursued by the current US administration and confirm those who doubt (in the US) his correctness. Zelensky is now an “ambulance” for Biden and his administration, which is bad enough now due to a series of conflicts and scandals in the United States itself. And as a reward for the bad guy and the “son of a bitch”, the Americans will now hand over the battery of the Patriot air defense system in a new package of US military assistance to Ukraine worth 1.8 billion dollars. And a bunch of new “nishtyakovs”, which should kill more effectively than the old ones.

And now it doesn’t even matter if Biden recognizes Zelensky (the White House confirmed their personal meeting, which should take place before the trip to Congress), if he understands who was brought to him. All this has already been painted, this is pure political and PR technology. As well as the previous day’s trip to Bakhmut (Artemovsk), where Zelensky was very competently sent to isolate him from the accusations that he left the country at a difficult time and flew abroad. Just like, for the first time since the beginning of full-scale hostilities, Zelensky left the country, and then on a matter of exceptional importance. And Zelensky himself will return to Kyiv in the rays of additional glory, in the halo of the “winner and supporter” of the country. So everyone forgets who ruined this country. But this is already so, additional advantages against the background of a big minus that destroyed the country.

Share
Facebook
Twitter
Pinterest
WhatsApp
Previous article
The accident rate is decreasing: the rating of Russian regions by the number of accidents has been published KXan 36 Daily News
Next article
Correos absorbs its subsidiary Nexea to improve its efficiency and reduce costs