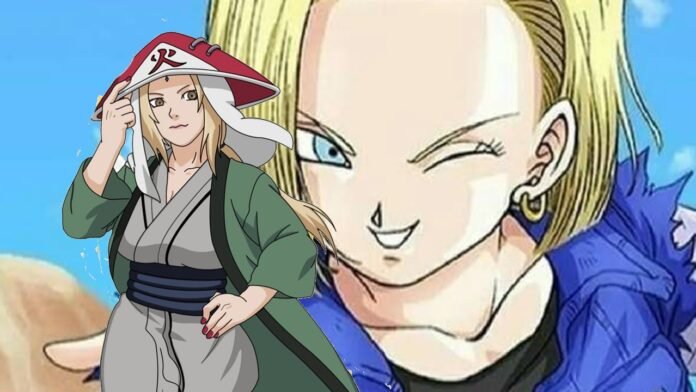 Tsunade must be one of the most cosplayed characters in the anime industry, even among fan art, as in the following illustration by Planeta_Dos_Sayajins (Instagram).

“Beautiful blondes full of power and ambition for money” could be a good point of convergence bringing together two of the most popular women in the Dragon Ball and Naruto fandoms. So the following illustration of Android 18 wearing the Fifth Hokage of the Village Hidden in the Leaves (Konoha) makes all the sense in the world.

Tsunade often wears a large green jacket and under it wears a gray kimono-style sleeveless shirt that is pulled together on her body with a bluish sash that matches her blue pants. In addition to appropriating her appearance, Android 18 also seems to have mastered the Byakugō no Jutsu.

Can the number 18 master a technique that requires spiritual energy? This is likely because Dragon Ball Z’s story suggests that he is not a machine as a whole, but rather a rebuilt human with robotic parts and unlimited energy.

Number 18 made a brief appearance in Dragonball: Superhero, and it’s likely we’ll see her again as the new Dragonball arc tells her story after the events of the movie.