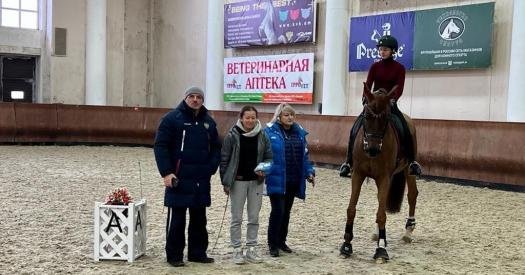 The training camp took place at the KSK “Vivat, Russia!” from November 29 to December 3, 2022. The news is very pleasant, there are videos on the Internet with positive, even laudatory reviews of these camps from athletes and coaches. Here one would rejoice at the fate of each individual young rider and domestic dressage as a whole, but there are nuances.

As can be seen from the report on the FCSR website, more than 30 young athletes participated in the training camp, and according to the available information, there were 47 athletes. According to the same information, there were exactly 30 participants in the training camp, and no more. It should be noted that funds were allocated for training camps, and the budget money for these specific training camps was probably allocated based on 47 people, not 30. We have nothing to say as to whether the difference went back to the known budget. .

But it is known who was responsible for the development of the TCB plans and the allocation of the budget. The official website of the FKSR published the minutes of the online meeting of the dressage committee dated June 04, 2022, which, in particular, contains the following information: “On the third and fourth points of the agenda: “Distribution of the budgetary funds allocated for the dressage discipline” and fees”. We listened to R. Salov, who reported that 74.5 thousand dollars and 6 million rubles of the funds allocated for the dressage discipline, 370 thousand rubles were spent only on training at the beginning of the year.

A decision was made: to instruct Soboleva OO to develop a plan for holding training camps and distributing the budget for travel of the Russian national team”. It was not possible to find in open sources information on the implementation of the developed plans and a report on what and how exactly the budget funds were spent. Perhaps Olga Olegovna, since she has been appointed responsible for the distribution of the budget, will be able to get an answer, where was the money intended for participation in the training camp of the seventeen absent athletes (the editor did not manage to reach the indicated number on the FKSR website)? I would like to hope that these funds are spent for the benefit of domestic dressage.

It cannot be said that equestrian sport in our country is financed too generously. There were cases when members of the Olympic team competed in holey boots, when riders had to pay for the transportation of horses to the competition venue from their own pockets … It is even more pleasant to hear and read about successful training camps. And all the more we want clarity and transparency in the matter of spending budget funds for training camps, for organizing competitions, for wonderful and exciting equestrian sports.