Arsenal’s game is far from champion. The Premier League leaders lost points in the first match of 2023 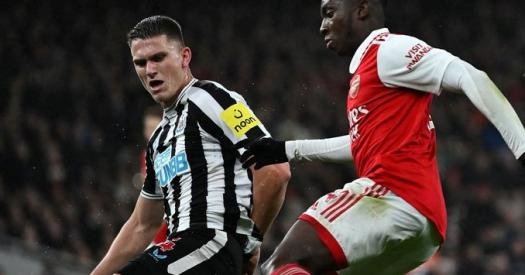 Could anyone have thought a year ago that the match between Arsenal and Newcastle would receive the prefix top and become the first of its kind in 2023? However, it was these teams that surrounded second placed Manchester City. In addition, the Gunners welcomed the New Year seven points behind the main pursuer of the “townspeople” and the “magpies” – two (albeit with the match in reserve).

Mikel Arteta’s team won every home game in the Premier League last autumn, and in this attempt to continue the winning streak, the mentor sent the regular squad with Oleksandr Zinchenko on the left flank of the defence, Martin Odegaard in the middle line and Bukayo Saka. in attack For the state of “optimum” this lineup lacked only the injured Gabriel Jesus, instead of whom Eddie Nketia went to the limit.

Eddie Howe didn’t have much to complain about either. Yes, his disabled list was longer, but he didn’t lose any of the majors. Kieran Trippier at right back, defensive midfielder Bruno Guimaraes and striker Joelinton, among others, all came out from the opening minutes. The confrontation between the system-forming midfielder Guimarães and Odegaard before the game was seen as decisive.

Howe somehow strangely prepared the team for this game. After all, everyone already knows how famous the space-accelerating Arsenal is and how quickly and easily they combine into someone else’s half of the field. However, the mentor of the guests chose a rather slow positional style. The Magpies tried to control the ball more, but they did not perform well in midfield and regularly made dangerous runs into their penalty area.

The Londoners had a great first 15-20 minutes, but desperately missed the last pass. As a result, in a series of dangerous approaches, there was only one real chance at goal, when Nick Pope saved Sack’s shot from a sharp angle. And gradually Londoners began to lose momentum. At the feet of Thomas Partey, the ball began to linger longer than it should, and Martin Odegaard, in his eagerness to aggravate, allowed too much marriage.

The whites and blacks in front couldn’t think of anything sensible. The foolishness of their attacks is primed, for example, by the fact that Callum Wilson, who was sent into the center of attack, touched the ball just nine times in the first half. Only the standards looked promising. One of them, just before the break, almost finished off with a goal from Joelinton, who, in the fall, closed the discount at the far post after a corner kick.

ARTETUS is okay with everything?

If Arteta did his homework better, Howe was clearer in the direction of the matches. In the second half, Newcastle came out more serene and determined, and in the first 15 minutes they took as many shots (four) as in the entire first half.

Particularly active was Joelinton, who managed both in front and behind. The latter is even more important as it helped Daniel Byrne stop Sack. It is characteristic that the winger has earned a warning for it. It is equally significant that in the middle of the half, Howe replaced the two Brazilian strike partners, Wilson and Miguel Almiron, and left him.

Arteta did not interfere in the game for a long time, seeing the loss of points more and more tangible from the sidelines. The only idea that occurred to the rojiblancos was a charge attempt by Saco. He ignited only in the 76th minute, and even then, since the release of right-back Takehiro Tomiyasu instead of Ben White, a serious increase in pressure in someone else’s box was not to be expected. Although strategically this is a reasonable move, under Joelinton and to help Sack.

Newcastle’s last 20 minutes were just defending, and from the results of the whole game it can be said that the game turned out to be close and even. Neither one nor the other rival did not surpass in something fundamentally significant. And they didn’t seem to be so against the tie either, although in the end Arteta almost ran into Hau’s one-on-one due to an unassigned penalty. However, in general, the zeros on the scoreboard have become an absolutely natural result of these 90 minutes. Above all, the Manchester City footballers, who will play tomorrow at Stamford Bridge, rejoiced at this.

Share
Facebook
Twitter
Pinterest
WhatsApp
Previous article
“Resting from idleness”: Chekhov, sunbathing in Mexico, angered subscribers with complaints of eternal fatigue
Next article
These are the best anime openings of 2022 according to Anime! Anime!