HomeSportsChelsea held their own against City throughout. And then Guardiola brought...
Sports

Chelsea held their own against City throughout. And then Guardiola brought Grealish and Mahrez into the fight 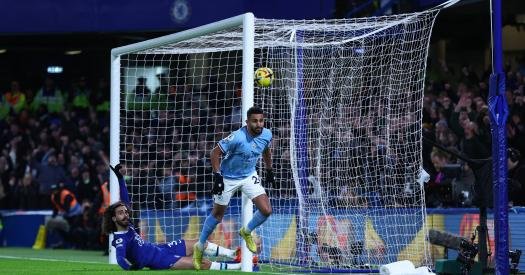 The beginning of the year definitely pleases us with status matches. On Tuesday Arsenal hosted Newcastle and on Wednesday Inter hosted the game against Napoli. It is noteworthy that both unexpected leaders of the championships of England and Italy failed: the Gunners for the first time in the season did not win at home, and the Neapolitans suffered their first defeat. The only frustrating thing is that in these 180 minutes, four teams scored a single goal against all of them.

The Citizens had a chance to close the gap on the leader, and everything indicated that they would cope with this task. Josep Guardiola’s casualties are almost negligible. Due to injuries, Ruben Dias and Aymeric Laporte are absent, instead of Nathan Ake and Kyle Walker they came out in the center of defense, but everyone else is in the assembly: Kevin de Bruyne, Erling Haaland, Phil Foden and all. more.

At the same time, the Blues were missing Rhys James, Wesley Fofan, Ngolo Kante, Ruben Loftus-Cheek and Ben Chilwell. Also, Raheem Sterling grabbed the back of the thigh a couple of minutes after the opening whistle and gave way to Pierre-Emerick Aubameyang. He also completely changed Graham Potter’s plan, because the striker went to the edge and Kai Havertz went deeper. And in the middle of the first half, Christian Pulisic had to switch to Karni Chukvuemek. Aubameyang was so bad that he left the field already in the 68th minute.

Before the start of the match, footballers and fans honored the memory of the late football king Pelé with a minute of applause.

HOLLAND ON A HUNGER RATION

The statistics of the teams in the Premier League could not but be reflected in the pre-match brochures: Chelsea won only one victory in the previous seven rounds, with three draws and three defeats. That is, the team is far from being in good shape. City shared points with Everton on the final day of last year, but they can boast of the performance of Haaland, who scored 21 (!) goals in 15 games, more than all of Chelsea.

Based on the idea of ​​the state of teams, it seemed that the “people of the town” would quickly show who was the champion here, but in reality the game turned out to be much more even than one might have expected. Yes, the Mancunians had more possession of the ball, but, firstly, not as abundantly as usual, and secondly, completely without sharpness.

The Londoners, in turn, looked structurally preferable: then Mark Cucurella (usually ran around the entire flank like crazy) in the opponent’s half of the field would jump behind the opponent’s back and tie a counterattack, then Hakim Ziyech, having played very good on the rebound, it will stick tight to the near corner. And halfway through, the Blues found they had even more of the ball at their feet. Don’t let it be for too long.

It is significant that Guardiola’s wards struck the first blow in the 32nd minute, and even that was not dangerous (Ilkay Gundogan unsuccessfully tried to twist the ball into the far corner from outside the penalty area), and the Netherlands touched the ball only nine times in this segment. However, he doesn’t need much. Shortly before the break, Gundogan broke through between the lines and rolled past Erling, who had picked up speed, down the field and shot just over the bar from outside the penalty area. However, it didn’t take long for Chukvuemeka to hit the post in a much more difficult situation from the penalty line.

EVERYTHING IS DECIDED BY THE SUPERIOR “CITY” BANK

In the locker room, Guardiola probably scolded his pupils noticeably. In the second half, instead of Walker and Joao Cancelo, Manuel Akanji and Rico Williams came out, and the “citizens” themselves staged a powerful assault on Kepa Arrizabalaga’s area, which miraculously did not end in a goal as soon as they returned to the field. field.

Guardiola sensed that the game had changed and responded well with a double substitution for Jack Grealish and Riyad Mahrez. Three minutes later, these two set up a goal: the first shot to the far post and the second, ahead of his opponent, sent the ball into an empty goal. For some reason, Kepa lost the ball, but Cucurella did not have time for a new opponent.

Admittedly, all of Guardiola’s changes hit the nail on the head, but it’s worth considering that Potter has no players of this caliber on the bench and only one slot left for replacements. And he clearly wanted to keep it in case of another force majeure. And I had to use it in the 68th minute, but Conor Gallagher, Omari Hutchinson and Lewis Hall are not the figures who are now capable of saving the game against a mega-team like City. The fact that they covered the opponent at the end had a couple of moments to upset Guardiola is praiseworthy.

The Citizens looked extremely unattractive in the first half, but managed to improve in the second and pull out such an important win. There are now five points for Arsenal, which certainly inspires the Mancunians and baffles the Gunners. And with each round, the pressure on the Londoners will only get stronger. Well, Chelsea remained tenth, 10 points from the Champions League zone.

Share
Facebook
Twitter
Pinterest
WhatsApp
Previous article
“We had sex for two days”: Anna Sedokova revealed the intimate secret of Pavel Volya
Next article
The head office of the Investigative Committee is waiting for a report on the fire in Cheboksary KXan 36 Daily News