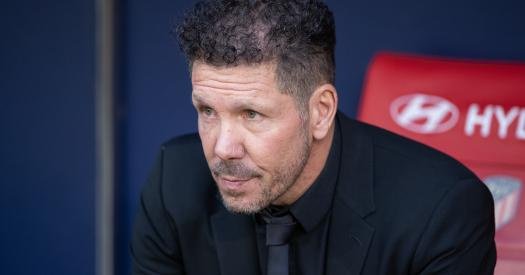 Perhaps the most discussed team participating in the race for the Spanish Cup is in danger of becoming Atlético. First of all, because the ‘mattress’ coach is currently the only football coach in this universe who can put five world champions in his starting eleven at the same time: Antoine Griezmann, Rodrigo De Paul, Tom Lemar, Ángel Correa and Nahuel Molina. But to expose does not mean to show the game. Therefore, if the black streak in Atlético continues further, even more spears will fly towards Diego Simeone. So for the rojiblanco mentor this privilege is like another challenge.

The clouds hung over the unsinkable Simeone back in the fall, when his “Indians” performed unsuccessfully in the Champions League, where for the first time in recent years the team ranked last in the group and was left out of the European competition. of spring. To be more precise, to indicate the degree of fall: Atlético for the first time in 10 years under the command of Diego Simeone did not reach the playoffs in either the Champions League or the LE. Therefore, secondly, it is, apparently, the already inevitable resignation of the charismatic Argentine. The mentor of the ‘rojiblancos’ immediately after the relegation from the Champions League said that now his main dream is to stay in charge of the team and win the prestigious cup. But the chances are high that Simeone will never conquer this peak.

Rumors have been circulating for a couple of months that a replacement is being prepared for him. The main contenders are Luis Enrique and Thomas Tuchel. The latter, by the way, hired a Spanish tutor, so it seems that the German was thoroughly attuned to Spain. True, according to Bild, if the former Chelsea manager cannot be brought to Atlético, he has an offer from Barcelona. Although this is strange. The Garnet Blue leadership strongly supports Xavi, and Tuchel himself said this summer that he was a bit upset with the Catalan club. By the way, immediately after the German broke off relations with the Premier League, Real Madrid was called his next place of work, since the contract with Ancelotti is calculated only until the summer of 2024. In general, Thomas has a good lobby. and someone is determined to add it to the Spanish championship.

As for Atlético de Madrid, today in the second round of the Spanish Cup they will face a Second B team, the Arenteiro club. The ‘Indians’ will visit a little-known but very thriving club, which leads the classification of the fourth Spanish division in importance, with 32 points in 15 days. By the way, in the previous phase of the Spanish Cup, the team eliminated Almería from the draw.

The match will start at 23:00 Moscow time in the small but cozy Espinedo stadium, designed for 3,000 people. And it will not be easy for Atlético, just as there will be no world champions in the first team at the moment. Just like that, Arenteiro, although with a squad of only 2 million euros, does not give up. The team, led by Javi Reyi, 37, is destroying their group this season: the Blanquiverdes have won nine times, drawn five times and lost only once. On account of the footballers “Arenteiro” 16 goals scored and only 7 missed – the team prefers futsal. But the “mattress” with the defense lately has obvious problems – “Atletico” conceded in almost all meetings.

However, Diego Simeone’s team definitely has more resources, and we are expecting not a passing encounter between the greats and the middle peasants, but a rich and productive game. The rojiblancos need to gain momentum, because now, without European competition, the main tasks of the club are the League and the Spanish Cup. And if there is still time to accelerate in the Copa del Rey, then the last result in the Example -fifth place in the standings without victories in the last three rounds- is definitely not the result that will save Simeone from dismissal, and not the result than the team with such potential.