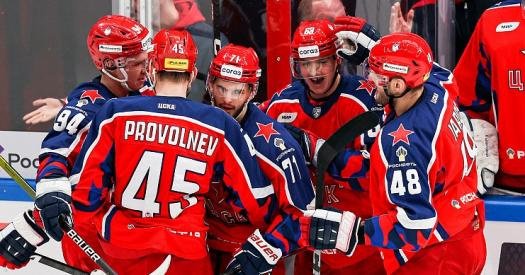 CSKA won a strong-willed victory in the first match after the New Year. The army team was helped to defeat Dynamo Moscow (3:2 OT) with their signature weapon: replacing the goalkeeper with an outfield player in extra time. The Blue and Whites were twice in front, the second goal by 17-year-old Igor Chernyshov the youngest in the club’s KHL history.

The stands of the CSKA Arena are filled almost to capacity (9383 spectators), the New Year’s mood – the champions have not felt such attention from fans for a long time. And the cue for the first match of the new year, 2023, is fitting: a classic Moscow derby. A week ago, on the same ice, in the 1,000th KHL game with CSKA, the blue and whites won 2-1. Absolutely deserved, allowing almost nothing to create a red-blue attack drained of personnel losses.

CSKA head coach Sergei Fedorov promised to return to the sick and injured immediately after the New Year. In fact, the infirmary does not empty, but begins to fill up again. Grigorenko and Mamin joined, who, according to the red and blue site, “breathed” properly during training on January 2. But, apparently, he overdid it and caught a cold. And sure enough, after the second return from overseas, the author of the golden goal in the 2019 playoffs looks somewhat withered.

And Grigorenko this season plays like he’s doing a favor. And let no one be fooled by his assist for newcomer Bryukvin in the last match with Yaroslavl (2: 1 OT). He set a club sniper record at the Russian championships and rests on his laurels.

We have already forgotten about Slepyshev, as soon as he returns to the ice, he takes a new ballot. Fedorov promised his return in mid-January. We wait…

On the eve of the derby, in the 56th year, the Olympic athlete Sergei Bautin, the captain of Dynamo in the 1991/92 championship season, died. The defender, merciless to his opponents, literally won a ticket to the 1992 Games in Albertville – he replaced a sick teammate during training, moving from the base of the blue-and-whites to the base of the national team in Novogorsk (he just crossed the road ). and Viktor Tikhonov liked it so much that he stayed. Bautin played in Ak Bars and a little in the national team with Alexei Kudashov, in Dynamo with Ravil Yakubov (Fedorov’s assistant at CSKA), in Albertville with Igor Kravchuk (with another Fedorov assistant). It would be logical to honor the memory of the champion with a minute of silence, it would not take a lot of time and some financial costs. Unfortunately, they didn’t think of that before.

But before the New Year, when Pele died, everyone literally went crazy. FIFA Chief Executive Officer Infantino strongly suggested that each country name the stadium after the King of Soccer. We will definitely name Luzhniki (where Pele scored two goals for the USSR national team in June 1965 – 0: 3), as soon as the Russian national team becomes the world football champion.

Ok, let’s talk about the derby. Kudashov in hot pursuit compared it to a throwback match between CSKA and Dynamo. It seems that the blue and white coach is partly right. His team quickly opened the scoring, soon missed a strange goal: three defenders, led by captain Mironov, did not notice Plotnikov in the far patch, who was found by the transfer of defender Yarosh.

After the break, the Slovak gave the 17-year-old debutant Igor Chernyshov a royal gift – he handed him the puck, come on, score! The junior said thank you and set a club record in the KHL. His goal is 17 years and 34 days. No, he’s not a relative of Dynamo founder Arkady Chernyshev, and he’s not even a namesake. His last names differ by one letter.

However, the guests failed to maintain the lead until the second break. To no avail, Kudashov angrily (not embarrassed in terms) demanded from the judges a 5-minute penalty for Mingacheva, who sent the blue and white Boikov defender to a fall. The offender was given only two minutes. Returning to the ice, the young soldier showed perseverance in the fight for the puck with the leader of the attacks of the guests Rashevsky, bit him and went one-on-one with Konovalov Okulov, who gracefully overcame the goalkeeper.

In the third period, the insidious puck flatly refused to obey the attackers. The evil genius of “Dynamo” Pankratov was able to find a strong counterattack, but could not tame the “black puck”. Yes, and in real time, when the army team traditionally replaced the goalkeeper with a field player, the same attack prevented Captain Nesterov from throwing from the “mustache”. True, Kamenev soon corrected his carelessness, firing from a much more respectful distance at nine. 3:2 – CSKA victory in the derby of neighbors in the classification. Home field advantage in the playoffs should not be underestimated. Dynamo’s winning streak was interrupted in the seventh match, but the record of the blue and white club in the KHL remained, which is also quite a lot.

Chelsea were suspected, but Man City were caught

Thiago Silva, 38, is in the symbolic team of the best South American soccer players according to the IFFHS