HomeSports"Formula 1" 2022: what is remembered from the outgoing year
Sports

“Formula 1” 2022: what is remembered from the outgoing year 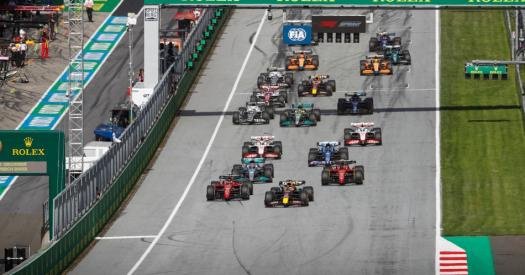 records of the year

Until recently, it seemed that Michael Schumacher’s records would be almost impossible to beat. But records are to be broken. Even if the number of races in the season has become much more than before. So the 2022 season brought a new record in Formula 1. Max Verstappen won 15 races of the season and surpassed the previous achievement of Michael Schumacher and Sebastian Vettel. The Dutch driver also scored the most points in history in a season with 454. The championship was held under the banner of Red Bull dominance: 17 wins from 22 races. But even with all these impressive statistics, Red Bull fell just short of the Constructors’ Championship record of 759 points. Mercedes scored 765 in 21 races in 2016.

Lewis Hamilton’s record could not be maintained. The seven-time world champion has won at least one race in every season in which he has competed. Except for 2022. This season, Mercedes’ only victory was taken by compatriot George Russell. However, Hamilton has something to be proud of: he joined the “300 club.” Only six drivers in Formula 1 history have completed more than 300 races. Lewis now has 310 starts. But there are three more ahead of him. True, Rubens Barrichello and Kimi Raikkonen will not replenish their statistics, but the leader of this rating, two-time world champion Fernando Alonso, seriously intends to found a “400 club”. And he has the opportunity to do it.

Alonso in 2022 became the record holder for the number of Grand Prix held. At the end of the year he has 355. Given the “multi-year contract” with Aston Martin, it is very possible that in the 2024 season the Spaniard will become the first and only driver to manage to exceed 400 starts. in Formula 1.

care of the year

Of course, the main departure of the year was the announcement of the end of the career of four-time world champion Sebastian Vettel. He was one race away from the Club 300. The Aston Martin driver announced that he was leaving on the eve of the summer break and the second half of the season, free, perhaps from pressure, showed that age was not an impediment to competing. After the break, Vettel scored 21 points from 9 races to put Aston Martin back in contention for sixth place in the Constructors’ Championship. The team caught up with Alfa Romeo, but could not surpass it in terms of additional indicators. However, Vettel himself said that he did not rule out restarting his race. So maybe there will be a replenishment in the “300 club”.

Another high-profile resignation of the season came at Ferrari at the end of the year. She caused a whole series of rearrangements, like the departure of Vettel (but more on that later). The position of head of Ferrari in 2023 will be left by Mattia Binotto, and he will be replaced by Frederic Vasser, who left the management at Alfa Romeo. There, the head place is vacant, but the entire Audi project, which will replace Alfa Romeo in 2026, was headed by Andreas Seidl, who was replaced by Andrea Stella at McLaren. Jost Capito withdrew from Williams. And all this in a couple of days. Since there are still vacancies, the news is worth waiting for.

scandals of the year

Russophobia, which gripped the Western world like a fever, did not bypass Formula 1. First, the FIA ​​banned Russian drivers from racing under the country’s flag, then removed them entirely and canceled the stage in Russia. Haas terminated the contract with Nikita Mazepin, refused to return sponsorship money to Uralkali. And then Formula 1 boss Stefano Domenicali said the Russian Grand Prix would never appear on the calendar again. However, Domenicali is a temporary phenomenon, but Russia was and is. Practice has shown more than once – take at least the stories of the 1980 and 1984 Olympics – that the Western world constantly forgets simple truths: never say “never” and that Russia as a country cannot be canceled.

And even more from politics to sport. 2022 will also be remembered for how Alpin Academy driver Oscar Piastri corrected the team and went… to McLaren. After the announcement of Vettel’s departure, Alonso announced his transition from Alpin. Piastri expected the Spaniard’s place, but the Australian opted for McLaren, replacing his compatriot Daniel Riccardo, who obviously had a poor season. Alpin tried to go to trial, but the FIA ​​opted for the driver’s side. As a result, Piastri in McLaren and in Alpin, a pair of French racers was formed – Ocon and Gasly.

Another scandal of the year is related to finances. Red Bull was accused of spending too much. The scandal reached such a point that it threatened to bury the FIA’s idea to cap costs or deprive Red Bull of the 2021 league title. Solomon’s solution was found. Red Bull pleaded guilty, the punishment turned out to be sensible, but not too severe, and everything went without reconsideration of the results. But… Ahead is the follow-up of 2022 with its inflation. And now they say that 8 out of 10 teams are at risk of exceeding the spending ceiling. So the second series of the financial scandal is definitely guaranteed for us.

hopes of the year

Ferrari got off to a good start last season and it looked like the Scuderia would finally get the title they had been waiting for so long. But Red Bull quickly seized the initiative. However, the potential of the scarlet cars suggests that next season they can seriously compete with the “bulls”. Like the Silver Arrows. Mercedes, towards the end of the year, faced its problems with the new regulations. And even managed to win a season win. Therefore, in 2023 we can see a fight between three leading teams and six drivers at the same time (we hope that Pérez will also intervene in this fight). Running from here will only get more interesting.

Fans of Nico Hulkenberg, who has returned to Formula 1, are also looking forward to 2023. The German has 181 Grand Prix starts and… not a single podium. Of course, it’s hard to imagine Haas cars allowing you to fight for the podium. It is true that in Brazil no one expected to see Kevin Magnussen on pole. The irony is that both Haas drivers have one pole each, both from Brazil. Only Magnussen had a podium finish (Australia 2014), but Hulkenberg unfortunately did not. There is something to dream about, because the race is unpredictable. The meeting of several cars, the surprises of the weather and now everything can be.

The special hope of 2023 is Robert Schwartzman. The Russian driver made his debut in Formula 1 driving a Ferrari in free races. The Maranello team believes in the young driver and looks for opportunities for him to compete. Maybe it’s an Indy Car, maybe an drag championship. And there may be a place in Formula 1, who knows.

After all, new Red Bull and Mercedes reserve drivers Daniel Ricciardo and Mick Schumacher are waiting for new places.