HomeSportsGolovin in the first game after a break: he helped Monaco win...
Sports

Golovin in the first game after a break: he helped Monaco win away and discovered a new talent 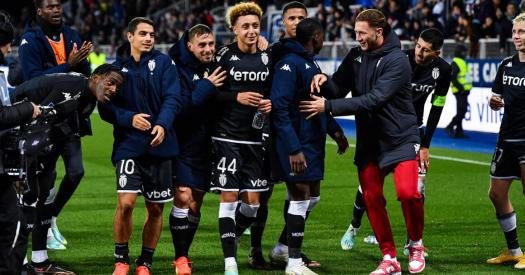 In France, before the New Year, the first round of the national championship takes place after a break for the World Cup. In addition to the usual stellar PSG, the special attention of Russian fans is attracted by Monaco, for which Alexander Golovin has been playing for four and a half years.

As in the past, this season he spends most of the games in the starting eleven, and at the end of October-November he also picked up a good rhythm: he scored against Angers and Toulouse and provided an assist in the game against Marseille. The Monegasques scored six points in these games. By comparison, he managed the same three effective actions in the previous 11 league 1 games.

It is even more surprising that after a break, the Russian spent the first half on the bench, and Takumi Minamino, who missed the first part of the season, came out at the start. Even game practice at the World Cup cannot explain this, because in Qatar he received only 58 minutes.

The Japanese spent the first 45 minutes very weak: 12 passes with an accuracy of 67%. The Monaco team, with high possession of the ball (62%), was inert in attack, and the former Liverpool player, although he tried, did not participate well in the collective game. True, it was he who, with his activity just before the break, won a penalty, from which Wissam Ben Yedder equalized: he threw the ball past Gideon Mens, and he, spinning in a dance, cut off his opponent with his foot.

HISTORIC GOAL WITH THE NAME OF GOLOVIN

Despite this only success, Philippe Clement immediately made a triple substitution during the break, replacing all the participants in the scoring episodes: Minamino, Ben Yedder and Eliot Matazo (after half an hour he earned a penalty in his own goal ). And he hit the target: the three who entered the second half also participated in all the scoring episodes: Yussuf Fofana scored in his, Elissa Ben-Segir scored a brace in the others, and Golovin assisted him.

It would be an exaggeration to say that the Monegasques have fundamentally improved with the release of new players. They also possessed the initiative, but still allowed counterattacks. In the first half, the goal statistic was 5-2, and in the second: 6-4. Rather, you should be prepared that Ben-Segir got rid of two of his moments.

The first of them was created by Golovin – during a positional attack, he received the ball 25 meters from the goal in a rather advantageous position, but did not start to hit himself, but went into the penalty area and rolled the teammate who had open on the left, who only had to roll the ball past the goalkeeper. Having praised the Russian, we will definitely note the historicity of this moment, because Ben-Segir is only 17 years old (he will come of age in February), and this was his debut for the rojiblancos in LaLiga. (before that, he played a minute in the Europa League).

10 minutes later, Fofana, with a technical heel, completed Auxerre’s corner with a shot into the corner of his own goal, but Ben-Segir, five minutes from time, gave the Monegasques victory. But how! He moved from the left corner of the penalty area to the center and fired his howitzer into the far corner. Judging by the trajectory of the ball, there was a rebound from the defender who tried to block the shot, but the goal became no less beautiful.

“MONACO” IN THE RACE FOR A PERMIT TO THE CHAMPIONS LEAGUE

Match results. Thanks to this victory, Monaco caught up with Marseille in the table, although the Provençals still have a game to play: tonight they host Toulouse. Golovin extended his winning streak to four matches (goal or pass), and young talent Ben-Segir scored a brace in the Monegasques’ opener. In the next round, “Monaco” faces 17 “Brest”.

Share
Facebook
Twitter
Pinterest
WhatsApp
Previous article
The Generalissimo Suvorov, the second serial missile carrier of the Borey-A project, was accepted into the Russian Navy – Rossiyskaya Gazeta
Next article
The Ultimate Holiday TV Guide: Where the Top Stars and Heroes of 2022 Perform on New Year’s Eve