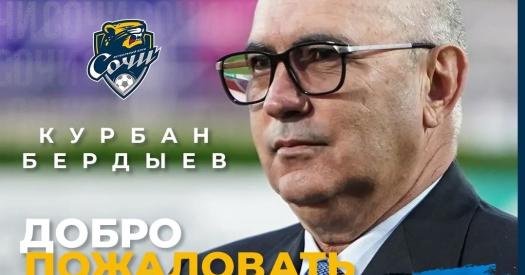 At the end of the most critical year in domestic football, its most effective manager in the 21st century returned to the Premier League. Of course, Yuri Semin earned the right to be called a maestro by a series of trophies with Lokomotiv, but he had much stronger resources in Moscow than Kurban Berdyev, who roamed the provinces.

Despite everything, the Turkmen coach managed to win two league titles with Rubin and make some noise with him and Rostov in the Champions League. Kazan and Rostov-on-Don have long been remembered by Barcelona, ​​​​Atletico, Inter, Tottenham, Chelsea, Bayern, Anderlecht, Ajax and PSV.

True, all these hits have already been covered with dust. It’s scary to say, but during the time that we didn’t really see Berdyev, he was already 70 years old. And we didn’t see him because at the end of the Russian stage of his career, things were not going well for him. From 2001 to 2019, he coached only two teams: Rubin and Rostov. And when Kazan called him from Rostov, he, of course, agreed.

But that period was bad for the Kazans. Due to the wild transfer policy in the recent past, they found themselves in a difficult financial situation and really did not have the money to not only strengthen, but even retain existing players. Berdyev fell into a transition period, when the players gradually left the team one by one. Right before his eyes, Jan Mvila, Ivelin Popov and Fedor Kudryashov were replaced at the base by Ruslan Kambolov, Dmitry Poloz and Yegor Sorokin.

An unhealthy environment produced unhealthy results. After the tenth place in the 2017/18 season, he was followed by the eleventh, and Berdyev, naturally, left. Still, with all the personnel problems, the coach was valued precisely for the ability to build a reliable system even in the football desert, but this time even he could not build an oasis in the middle of the arena.

For two years, Berdyev did not officially shine anywhere, and then he appeared in Kazakhstani Kairat, the club for which he played as a player and worked as a coach. He first joined the club’s board of directors, and then led the first team. He won the National Cup and bronze in 2021, but for a team used to at least second place, it was a near miss.

Berdyev’s wards frankly failed in the new season: four wins in 12 rounds, 0:3 from Atyrau and 0:6 (!) From Astana. The signing of Viktor Vasin does not go unpunished for anyone. In May, Berdyev was naturally fired and went to Iran, where he managed to solve only 11 matches with Traktor; in November he won just four games and left his job without regret. True, on his own initiative. He really wanted to go back to Russia.

A month ago, Boris Rotenberg admitted that Berdyev would be Sochi’s new manager, and the media reported that several of his former charges, including Christian Noboa and Soslan Dzhanaev, lobbied for him at the same time. With Vladimir Fedotov, despite the very interesting game of the team at the beginning of the season, they did not do very well. The southerners floundered in the second half of the fall: they went on a championship break in ninth place and flew out of the Cup.

There was no doubt that the team needed fresh emotions, but it was hard to believe in the arrival of Berdyev. Still, he is a very specific trainer. He arrives with his coaching staff and tries to influence the transfer policy a lot. Anyway, that’s the reputation. Sochi, on the other hand, is a young but modern football project, striving to follow advanced examples in management, and the patriarchal image of the coach was difficult to fit into this framework.

They write that his contract is for two and a half years, and Berdyev started working a month ago: he planned winter training camps and resolved personnel issues. They say that the new Rubin leadership wanted to return Berdyev after the break with Leonid Slutsky, but this train seems to have left.