He scored 483 goals in 87 games. Wunderkind or promoted upstart? 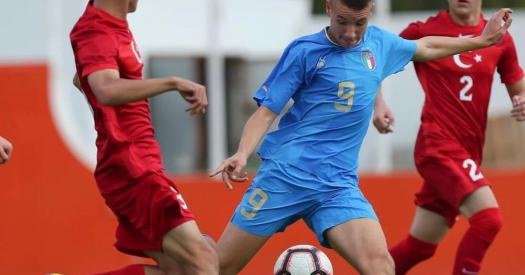 The Italian national team is considered one of the strongest in the world, but too often it lacks something for great success, and high-profile failures are also characteristic of it. So, the team did not make it to the 2022 World Cup, and head coach Roberto Mancini is having big problems with the choice of players, so they even have to persuade some Brazilians to take Italian citizenship. However, very soon Squadra Azzurra can get a real top striker, which will take away a lot of their problems.

WHAT ARE YOU TALKING ABOUT?

The hero of the article is called Francesco Camarda, he is only 14 years old, but already worthy of being known. He is a classic center forward who, even in his youth, has reached great heights. For example, as a 13-year-old boy, he won the Italian under-15 championship with Milan, which the club last achieved in 2010. Two years in youth football is a huge chasm, but Camarda was not promoted upfront and actually played an important role in the league title, including Fiorentina’s golden goal.

Currently, Francesco plays in the Under 16s, and in the championship between these ages he leads the scoring table with 11 goals in 9 games. Sometimes the striker is transferred to more senior teams and, most surprisingly, the performance does not drop. For example, recently Francesco played in Milan U19, where his double gave victory to an opponent with a score of 4: 2.

However, one should not be surprised at his brilliant game against much older players, because among his peers he dominated so powerfully that it is scary just to imagine these numbers:

At the international level, too, everything is in order. With Italy U15 he scored 5 goals and 2 assists in 5 games, and now he is gradually adapting to the U16 team.

Perhaps Francesco will be helped by his physical data, which many young people of the same age do not even dream of. The 14-year-old forward reaches a height of 182 cm and a weight of 60 kg, and given his style of play, it is not surprising that he is often compared to Erling Holland and Karim Benzema, the latter, by the way. . , he is the idol of the Italian.

Only time will answer this question. There have been many examples in soccer history where many guys have dominated the junior and youth levels, but have not been able to adapt to professional soccer. It is not necessary to look far for an example, because the once “most promising football player on the planet” immediately comes to mind, the Rossoneri graduate Hakim Mastur, who, like Kamarda, also did not notice his peers in Italian youth. He won championships and won audiences over with video clips that showed incredible possession of the ball and great feints, but quickly deflated. The Moroccan almost made it to the Milan main team, but he withered away and after several attempts to gain a foothold in Europe, he ended up in the second division of the Moroccan championship, even though he is only 24 years old.

It is important that Kamarda does not slow down, and Milan must do everything possible to correctly and timely bring the student to the games of Serie A and the Champions League. Perhaps we are seeing the evolution of Italy’s best striker for the next 15-20, or perhaps he will become another disappointing player who will soon be forgotten.