HomeSportsMoses Cobnan David is a newcomer to Krasnodar and Mbappé to the...
Sports 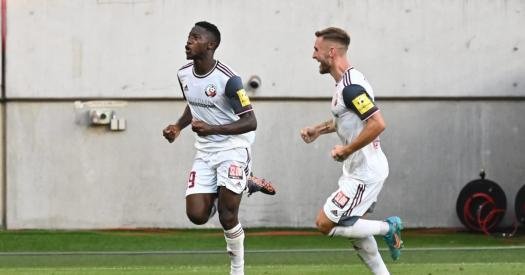 Moses Cobnan David is a new name in Russian football, which was provided by Krasnodar on January 5, 2023. His purchase cost the “bulls” 1 million euros, which is quite small even in today’s RPL. But who is this? And can he help take the team to the next level?

Where did you play, how did you get to Russia?

Moses Kobnan David is only 20 years old, but for Krasnodar he should not become another Jonathan Okoronkwo or Olakunle Olusegun, who broke into the main team of the club through the second team and reserves, but a full-fledged reinforcement at the moment. Already in the second part of the 2022/23 season, he can help a renewed team with a new coach.

There is not much information about Kobnanu, but we managed to find something interesting. He started his football career in his homeland, in Nigeria, and in 2021 the talented boy was noticed by Slovakian scouts. In Slovakia he adapted quickly, scoring once in his debut season, but became a real discovery this year, when he was signed for free by top division club Zeleziarne Podbrezova. In it, Kobnan scored 9 goals in 18 matches of the Slovak championship, and also scored 5 goals and 2 assists in 3 matches of the country’s cup. In addition, there were four goals in the Slovak Cup in one match.

Kobnan, traditionally for Nigerian forwards, has phenomenal physical data. His height is only 174 cm, but a decent muscle mass and 71 kg of weight do not make him a scapegoat on the field. And in order to take him down and get rid of the ball, you first need to catch up with the Nigerian, which is extremely difficult to do. Kobnan is noted for his faster acceleration, in which he is easily recognizable by his trademark big, sweeping strides, but it would be wrong to call him a typical runner. Unlike many other fast young Africans, Moses Cobnan David is not without a sense of combinations and team play, so he doesn’t have to rely solely on speed qualities.

Kobnan is excellent at comboing, following the game, and by completing attacks, everything is in order. The newcomer from Krasnodar knows how to play in any attacking position, but not only this plus bribed the Russian club. Not the last role was played by the style of the now former Kobnan team, which, like Krasnodar, preferred to play attacking football with a lot of pressure and full possession of the ball.

Kobnan may often be compared to Ahmed Musa for his speed, experience and goal-scoring ability, but if you take a chance and speak up ahead of time, there is a feeling that he is potentially much better than the former CSKA striker, who also was. . simple. Kobnan is many times a more flexible player, and if you compare him to someone then Killian Mbappe, but only by RPL standards.

Share
Facebook
Twitter
Pinterest
WhatsApp
Previous article
The truth about the cowardly US plans for Russia revealed: They need a world without us
Next article
Germany to send around 40 Marder infantry fighting vehicles to Ukraine KXan 36 Daily News