HomeSportsPelé, Tostao, Jairzinho: how the King of Soccer won his third World...
Sports

Pelé, Tostao, Jairzinho: how the King of Soccer won his third World Cup with great partners 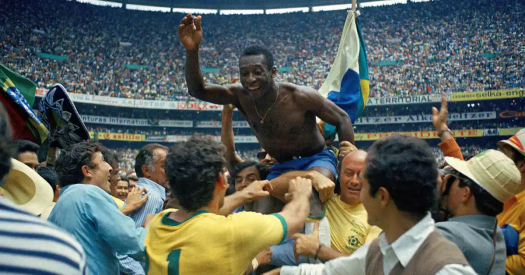 It is true that it was the strongest Brazilian team in history. Pelé was at his peak: 29 years old. He turned thirty in October 1970. Already a mature teacher, in the juice itself.

Also, Brazil has a great team: Tostao, Jairzinho, Rivelino, Gerson. Carlos Alberto, Clodoaldo. You can list everyone. The Brazilians scored at least three goals in every game, regardless of the opponent. They got the only minimal victory over the current world champions, the British: 1:0. This match was reminiscent of a game between two outstanding grandmasters. Despite a goal scored, the game was full of great moments and a lot of tension. Jairzinho scored in the 59th minute.

My older brother cut out a photo from Soviet Sport illustrating this match. I fought with the ball, and against him the great Bobby Charlton.

It was the second match of the group, the victory gave the Brazilians access to the quarterfinals. And it also gave him even more psychological confidence.

And the Brazilians began the tournament with the defeat of Czechoslovakia – 4:1 (Rivelino, Pele, Jairzinho -2). We finished with a victory over Romania – 3:2 (Pele-2, Jairzinho).

And then the Brazilian Express was unstoppable. Then only 16 teams participated in the championship, so the playoffs began with the quarterfinals.

Pelé opened the scoring in the 18th minute. In the fight for the ball, he overcame the defender and headed. On the 37th, the Brazilians failed after a ridiculous mistake. Goalie Felix he ran out of the penalty area, where he collided with his defense. pretty hit an empty net. The teams went into the break with the score 1:1.

And in the second half, the world saw the Brazilians in all their splendor. at minute 66 gerson a beautiful goal scored with a sweep from outside the penalty area.

On the 71st, Jairzinho, after discount, Pelé headed past the defender and sent the ball into the goal – 3:1. He completed the win in the 86th minute Charles Albert.

Images of fans carrying Pelé in their arms have spread around the world. And this photo was printed on the front page of all the newspapers.

That championship and the game of the Brazilian team impacted many. Including Vladimir Vysotsky, who is not the biggest football fan. But in his famous football song “Commentator from his booth”, well, where Fiorentina give a million for Byshovets, Vysotsky paid tribute to that great team.

I am sitting at zero, Garbage bought his wife – and glad. And Pelé – “Chevrolet” In Rio de Janeiro.

It may not even count to one hundred, but I can say without further ado: if Tostao had a second eye, he would score twice as many goals.

Tostao had a second eye, he just couldn’t see it at all. In 1968, in the Brazilian Cup match, the Corinthians defender hit the forward with the ball right in the eye. The result was a retinal detachment. The Brazilian is actually blind in one eye. Vysotsky harshly overcame this shortcoming of the striker.

So, this was the last World Cup for Pele, he completed his career in the national team. And Goddess Nike went to Brazil forever, where years later she was stolen and disappeared. But that is another story.

Share
Facebook
Twitter
Pinterest
WhatsApp
Previous article
Bevza IT expert: Yandex and Sberbank’s mobile operating system is an attempt to copy the experience of Huawei KXan 36 Daily News
Next article
10 things we will remember about the fashion of 2022 by