HomeSportsRostec and SPbPU created a sled of aerospace technology for the Russian...
Sports 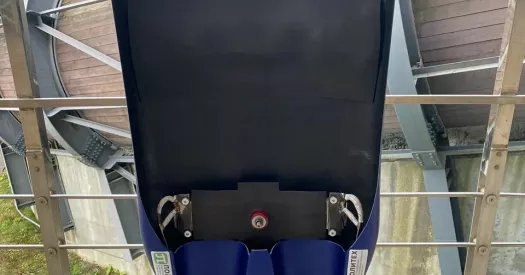 The design of the product uses unique materials of special resistance and lightness, which are used, among other things, in the space industry.

The Peter the Great St. Petersburg Polytechnic University developed a new sled design based on digital twin technology. Several Rostec companies were involved in the creation at once – ONPP “Technology” bears the name. AG Romashina, NPO “Splav” them. A. Ganichev and Uralvagonzavod (UVZ).

The body and cover of the sled were made with domestic glass-based materials and filled with carbon, which gave the sports equipment the necessary resistance, rigidity and aerodynamics. Some of these materials are used in the aerospace industry.

“When Roman approached us with the question: can we create the best sled in the world? It sounded like an incredible challenge and our specialists accepted it with great enthusiasm. It may seem that the sled is a simple design. Actually, every detail, shape, angle of inclination, material quality and other nuances decide a lot. The sled was built like a real plane, with the participation of designers from various industries. An important task was to find the best combination of materials and geometric solutions”, says Ekaterina Baranova, Director of Communications at Rostec.

The sled fairing mounts are made of high-strength alloy. They withstand pressures of up to 5G, which is comparable to overloads during aerobatics of a supersonic fighter. Such characteristics of the bindings are very important, because during the passage of the track, the sled with the athlete accelerates to speeds of 130-150 km/h.

“The sport of highest achievement is an area where the outcome is sometimes determined by a fraction of a second. As a result, our specialists from Tekhnologiya, Splav, UVZ created the sled using the most modern materials and advanced production technologies, including those from the space and defense industries. I am sure that with the help of our development, Roman will confirm his high sporting status more than once and win more than one gold medal. Rostec now supports him personally”, says Ekaterina Baranova.

Sled skates are made according to a unique technology that has no analogues in Russia, from Hadfield steel (a material with high wear resistance under high pressure or shock loads, which at the same time has high ductility). Modern railway tracks, tank tracks, and asphalt paver rollers are made of this material.

“This year I turned to Rostec with a request to develop a sled for myself as an Olympic champion. They helped me: St. Petersburg engineers worked on the project, Rostec was engaged in the search and development of technologies, the selection of materials and the production of parts. Many thanks to Rostec for your help. This is a sure step in technological development for sure.

I didn’t really have a sled last spring. And there were certain issues that needed to be resolved, regarding the sled and the continuation of a sports career. Therefore, I did not go to the Russian Championship. Have the sanctions affected the production of sleds?

Our mechanics have always worked here, they still work, they order materials, they come. Just a slightly different approach. Rostec has the highest level of technology, production, modeling, miscalculations. Therefore, I decided that I needed to somehow develop, move. The Olympic season was not very successful. There are two ways: leave the sport in general or develop normally in it. I went the way of development. Thanks to Rostec Polytechnic University and Ekaterina Baranova, who believed in this story and helped me. That is, these people who really believed in me and the result was good,” Repilov said.

On December 24, Roman on a new sled from Rostec became the winner of the All-Russian Luge Competition Federation Cup. The athlete took first place in the individual competition with a result of 3 minutes 27 hundredths of a second, having developed a maximum speed of 137 kilometers per hour on the track.

Rostec State Corporation is the largest industrial enterprise in Russia. 2022 marks the 15th anniversary of its founding. It brings together around 800 scientific and industrial organizations in 60 regions of the country. Key areas of activity are aircraft manufacturing, radio electronics, medical technologies, innovative materials, etc. The corporation’s products are supplied to more than 100 countries around the world. Almost a third of the company’s income comes from the export of high-tech products.