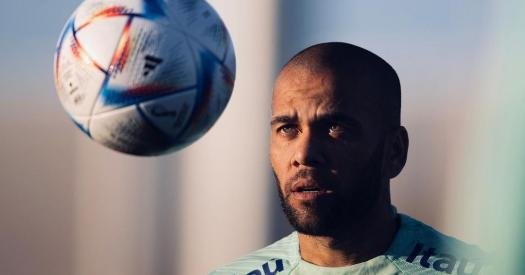 Everyone probably heard the details: at the end of December, a certain girl accused the former legend of the “blue garnet” of inappropriate behavior. According to the victim, while relaxing in one of the nightclubs in the Catalan capital, she bumped into a famous soccer player and instead of an autograph from the Brazilian, she received harsh tackles: first, Dani “shamelessly groped” her, and then he put his hands on her. under her underwear. As a result, the potential victim had to undergo a medical examination in the hospital, as well as visit a psychologist.

The Tokyo 2020 Olympic champion denies all the allegations against him. Alves does not deny the fact that he was in the right place and on the right date, but not for long and did not cross paths with the victim. In addition, he went to this nightclub accompanied by his wife, the Spanish model Joana Sanz. Since the Brazilian defender left Catalonia this summer to play for the Pumas de México, he only spent a few days in Barcelona to attend the funeral of his mother-in-law.

Overall, the story so far seems extremely murky. On the one hand, there is the testimony of Alves’ wife and her friends who were with them that day. On the other hand, if the information leaked to the Spanish media is to be believed, the investigators obtained a video recording of several girls approaching Alves’ company. After that, the player and one of them supposedly go to the bathroom. But what happened next is not visible in the log. But it seems that the Barcelona courts have some more compromising evidence on Alves. Despite the fact that the Brazilian showed full readiness to cooperate with the investigation, and even before, he was not seen in such situations, after the interrogation, Dani was arrested in court as a dangerous criminal. He now has the floor of the prosecutor, who must determine the precautionary measure for the former Barcelona defender, and, judging by the determined attitude of the Local Police, they do not intend to seek concession opportunities for the honoree. football player.

So in the near future, Alves’ current club, the Mexican Pumas, will have to play without its main star. The main thing is that you don’t have to be left without a legendary defender on your roster.

Alves is 39 years old and, yes, he is still in top form. But will the Brazilian be able to return to big football if he still has to go to jail, even for a short time? And this is more of a psychological issue. When you have such a brilliant career behind you, 46 titles (Lionel Messi, by the way, only has 42), being behind bars, ending your path in big football, either through stupidity or by chance, then another test.

Share
Facebook
Twitter
Pinterest
WhatsApp
Previous article
Abrams renditions are more dangerous than sending leopards: how many tanks will the US and its allies send to Kyiv and when
Next article
Yolanda Díaz convenes the dialogue table to discuss the rise in the SMI