HomeSportsSKA evened the score in the Army Super Series. And the...
Sports

SKA evened the score in the Army Super Series. And the CSKA leaders were silent again 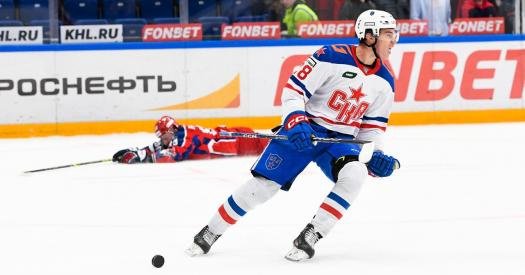 The locals took advantage of the mistakes of the champions, who were disappointed by the legionnaire. The Moscow army suffered a third defeat in a row, which leads to certain thoughts. In the playoffs it will be difficult to rebuild.

CSKA goalkeeper Sharychenkov played the fourth game in a row. Apparently, he is preparing for the playoffs, where the rotation in the last frontier is not welcome. However, after the victory in Moscow over SKA, they lost three times in a row. His opponents – Konovalov, Huska and today’s birthday boy Nikolaev – outplayed the Muscovite, who has not yet learned how to get important matches.

However, blaming the goalie is a thankless task.

At CSKA, those who were to lead the team again seemed faded. Troika Grigorenko – Karnaukhov – Slepyshev, as in Nizhny Novgorod, literally crawled on the ice. She is locked in the zone for a long time, at the gates of Sharychenkov the ice begins to melt. Pitertsy leveled the score (Khairullin) in an elegant counterattack. It was started by defender Nikishin, who pissed off Slepyshev in the backcourt as a child. And with a pass over the backboard he sent his partner on a date with Sharychenkov. And the defenders of the Muscovites Nesterov and Sergeev rose too high, forgetting about the rear.

Once again, everything went wrong in Okulov. Yes, and advocates have a lot of questions. Provolnev acted carelessly in the Spartak style: he twice delivered the puck to opponents in his zone. Gusev took advantage of the second gift and ended the derby – 3:1.

In the third half, the guests were closer to the goal, forcing the hosts to relent under high pressure. But the Muscovites’ offensive ardor was brought down by two disposals. I am still at a loss for which Bryukvin received a fine. The leaders did not take advantage of this elimination. Also, Sorkin could have scored on a counterattack, but Nikolayev came to the rescue.

Soon Yarosh, knocking over the puck that had landed in the net by rounding the gate, overreached and tossed it into the stands. Retribution for the stupid foul of the mysterious legionnaire immediately followed: the inconspicuous hero Galimov caught a rebound on the back of his partner and hit an empty frame.

And the best among the losers in the third period was the fourth link Abramov – Pankratov – Poltapov, in which the latter replaced Bryukvin, who passed the third three instead of Mamin, who received damage.

“After such defeats, confidence is lost,” Fedorov once said. This evil is not so handy, it is bad when confidence becomes self-confidence. Not the fact that CSKA retains its place in the strongest quartet in the West.

The ‘Torpedo’ with a record that does not reach half the salaries, leads the champions-tostosums and is about to surpass them in the classification. And today’s defeat of SKA gave the team of Roman Rotenberg confidence, which is extremely important a month before the playoffs with the “spear”. However, now there is no certainty that the army team will meet in the cup round.

Share
Facebook
Twitter
Pinterest
WhatsApp
Previous article
There will be tanks, but not now: the United States discouraged Ukraine with the decision to supply Abrams
Next article
Telefónica places 1,000 million in green subordinated obligations