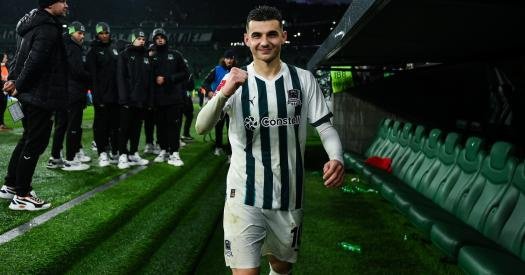 The 22-year-old midfielder, who rose almost single-handedly to the “bulls” in the standings, added the strongest of all, quite naturally. In the RPL, he has 15 (9+6) performance points in 16 games (hereinafter the statistics for the autumn part of the season) and two more goals for the Armenian national team, both against Ireland in the June games and september. He deserves no less vivid epithets than a year ago Arsen Zakharyan.

The oldest player in this top is 25 years old. I got into it quite by accident. The fact is that the starting point is taken on January 1, 2022, and the price of Nicholson’s transfer was updated on January 6 (6.5 million), exactly one day before the sale of Charleroi to Spartak for 8 millions. previous estimate of October 6.

It was taken as cost on January 1, although it is clear that the price of the Jamaican jumped more than double in the last months of last year, and not during the first week of this one. And for June 2, transfermarkt raised its value to 7.5 million (compared to the current 7 million), which also hints at the ambiguity of 2022 in a footballer’s career. However, he really spent the fall well, he began to enter the team more often and delighted the fans with goals.

The new star of the team Valery Karpin. It is impossible to explain what guided Krasnodar when he parted ways with the midfielder so easily. First they rented it to Akhmat, and in the summer they sold it for 3 million to Rostov. Here he made an outstanding team with Nikolai Komlichenko and became a soccer player for the Russian national team. The boy is 23 years old.

The second peak of the magnificent Rostov triangle in midfield, the captain of the yellow-blues and at 23 years old is already one of the veterans (in the team since 2019). He burns the support zone and links defense with attack (4 + 3 in 17 games). One of the key figures in Karpin’s constructions.

The Brazilians from Zenit do nothing but compete in which of them can be called the most valuable acquisition, and the central midfielder is not inferior to his peers in this. And in terms of intelligence, perhaps, he surpasses at least most of them. Brilliant attack organizer, showing good finishing: 7+2 in 16 games.

He continued to grow by inertia and by his youth. In the spring, Arsene was no longer as bright as a year ago, and in the fall, due to the heavy losses to the Dynamo team, he left to fill a gap in midfield, where he is not as effective. However, he confirmed his class of last year as a footballer with great potential.

A year ago, transfermarkt had no idea of ​​​​Mantuan’s value, and now they estimate it at 3 million. In the RPL, he spent only 191 minutes on the field, but he managed to score 3 + 1 during this time. Great performance for two, indeed, matches. It would be interesting to see him in a team where the 21-year-old midfielder will get constant playing practice. The perspective is clearly visible.

The only representative of the army club. For him, the most successful segment was the start of the new season. With the arrival of Vladimir Fedotov, the Colombian began to succeed in everything: passes, dribbles, shots from any position. In the first 9 rounds, he scored 5 + 3, but, as practice showed, it was just a splash. As of the second half of September, Carrascal returned to his rather mediocre level.

Another young footballer from the Rostovites who deserved applause. In the fall, he established himself on the right flank of the yellow-blue defense, won the competition against the experienced Denis Terentyev, scored against Krasnodar and Akhmata and has already donned the Russian national team jersey twice. Having rented the defender, Lokomotiv is probably already thinking about how to return him ahead of schedule.

One of the openings of the autumn part of the season. Kovalenko is another Chertanovite in Samara, having just arrived here on loan from Sochi in the summer, when Wings of the Soviets handed over a group of their leaders. Kovalenko managed to immediately gain a foothold in the base. More than him in this segment, only the defender Alexander Soldatenkov spent on the field (1530 minutes against 1492). But Kovalenko is only 19 years old.

It is also interesting to see who added the most value in relative terms. This is an indicator of the individual progress of new players for most spectators and specialists. It is significant that Kovalenko was also at the top of this ranking. That really is one of the top discoveries of the year!

Based on this gauge, the top ten RPL players in 2022 look like this:

Share
Facebook
Twitter
Pinterest
WhatsApp
Previous article
Bloomberg: Superyachts From Around The World Gather In The Caribbean For Luxury Parties KXan 36 Daily News
Next article
Not the manager of a strip club, but the owner of a brothel: in Kyiv, they were offended by an American TV presenter who criticized Zelensky