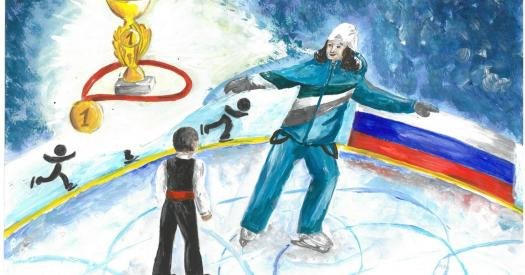 The award ceremony will be attended by: Minister of Sports of the Russian Federation OV Matytsin, Olympic champions of Russia (Nikita Nagorny, Daria Spiridonova, Olga Brusnikina, Sofia Velikaya and others), representatives of specialized sports federations.

The competition is organized by the State Sports Museum together with the All-Russian public organization of the society of physical culture and sports of trade unions “Russia”.

The competition is aimed at popularizing sports and a healthy lifestyle, shaping the need for physical education and sports among children, as well as developing creative abilities and imagination.

The All-Russian Drawing Contest was held from November 14 to 30, 2022. 83 constituent entities of the Russian Federation took part and 8177 drawings came! The number of submitted papers and the scale of coverage made the competition the largest since the USSR!

Winners were determined in 4 categories:

Oleg Matytsin – Minister of Sports of the Russian Federation

Istyagina-Eliseeva Elena Alexandrovna – Director of the State Sports Museum, Deputy Chairman of the Commission of the Civic Chamber of the Russian Federation on Physical Culture and Promotion of a Healthy Lifestyle

Find out about all the winners and watch the broadcast of the awards ceremony on 12/27/22:

The first winners have been named and can be viewed here: https://vk.com/fsop_russia

All 8177 drawings will be actively used at events dedicated to the 100th sports industry. In 2023, 100 years of the governing body in the sphere of physical culture and sports will be celebrated. An impressive period filled with great victories, records and outstanding achievements.

A unique photo work dedicated to the 2018 FIFA World Cup will be included in the exposition of the State Sports Museum.

On December 27, the State Sports Museum will host a solemn transfer of a unique photograph by Alexei Kharin and Andrei Tsyganov “A ticket to history or a hundred thousand faces of the football capital.” As you know, Russia has passed the baton of the FIFA World Cup to Qatar, a country that has just finished the 2022 FIFA World Cup.

The photo was taken from the top floor of the main building of the Moscow State University named after MV Lomonosov during the 2018 FIFA World Cup. It captures the jubilant moment of fans from different countries at the moment of the decisive goal of Artem Dzyuba against the Spanish team. According to official figures, at that time there were 98,000 football fans in the Sparrow Hills fan zone. This large-scale photographic work was listed in the Russian Record Book and the Moscow Record Catalog as the world’s largest printed photograph with the largest number of individually distinguishable faces: twenty-four thousand five hundred and two fans (24,502). Each person depicted in the photograph was manually counted by employees of the Russian Book of Records together with its founder and editor-in-chief Stanislav Konenko. The photo was presented at international art exhibitions dedicated to the world of football: at MGIMO and at the National Museum of the Republic of Kazakhstan, in Nur-Sultan. The work drew particular attention from visitors, including prominent statesmen and public figures, representatives of the sports and cultural community, and diplomats.

The Sports Museum collects unique artifacts that are transferred to the Fund of the State Museum of the Russian Federation and form the basis of the sports and historical heritage of our country.

The Minister of Sports of the Russian Federation Oleg Matytsin, the Director of the State Sports Museum Elena Istyagina-Eliseeva and others will take part in the award ceremony.

Share
Facebook
Twitter
Pinterest
WhatsApp
Previous article
The leadership of Brazil, the progress of Morocco, the fall of Russia. FIFA updated the classification of teams after the 2022 World Cup
Next article
Military special operation in Ukraine December 23, 2022: live streaming online