HomeSportsTavares will not reinforce Spartak. This transfer is overrated.
Sports

Tavares will not reinforce Spartak. This transfer is overrated. 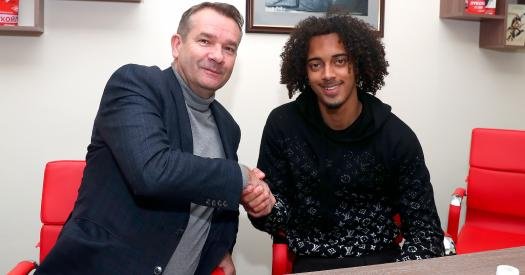 Spartak fans welcomed the transfer of Tomas Tavares from Benfica with enthusiasm, and there are reasons for this. The 21-year-old with experience playing in the Portuguese Championship, a Golden Boy nominee, has previously crossed paths with Guillermo Abascal in his career, but in reality not everything is as easy as it might seem at first glance.

Tomás Tavares is called to close problematic positions, the flanks of the defense, but there is no guarantee that he will be better than his predecessors. Many have criticized Nikolai Rasskazov, who is one step away from leaving for Wings of the Soviets, but it is not a given that Tavares will immediately look better than the Russian defender. In 2020, Alavés believed in him, but ultimately broke the lease, returning the boy after just three months. In total, Tomasz played 238 minutes, that is, 2.5 complete games.

A more or less successful lease can be called an annual trip to Farensa from the Portuguese Championship, which, although it flew at the end of the season, it was Tomás who played 18 starting matches, which he can boast of. Good numbers for a 19-year-old defender. Little was achieved in attack, but there were no doubts in his defense.

This was followed by another loan – to Basel, but it cannot be called successful either. At the end of the season, Tavares became 17th in terms of goals + assists in 90 minutes of playing time among teammates. It is obvious that it would be difficult for the defender to take a place at the top, but Tomasz lost, including four colleagues in the position. But the Portuguese stood out for other indicators, but one can hardly boast of them:

Surely he could have played even more, because he was just beginning to be highly valued by the then unexpectedly appointed coach Guillermo Abascal, but a serious injury prevented him from doing so at the end of the season, a torn cruciate ligament. Yes, he is only 21 years old, and many even older players experienced this serious injury, but Tavares’ form and condition after recovery remain a mystery. The Portuguese has not yet played a single match this season, so it is foolish to expect him to immediately strengthen Spartak, and even more so one should not expect him to play a key role in the spring segment of the season.

The transfer of Tavares is publicized, praised, but I would venture to suggest that he is too overrated. A small amount of match practice and cross-breaking raise questions. Perhaps the Spartak coaching staff will be able to prepare him well in a short winter training period, but at the moment it is too early to say about a successful transfer. I can’t believe that Benfica, who knows how to sell players at a high price, got rid of a promising 21-year-old for only three million euros so easily and simply.

Share
Facebook
Twitter
Pinterest
WhatsApp
Previous article
Paris Hilton became a mother for the first time: the child was born from a surrogate mother
Next article
Justin Bieber sells rights to his songs for $200 million